Humor and Wit as Political Weapons for Winston Churchill and John F. Kennedy


Editor's Note: This excerpt is adapted from When Lions Roar: The Churchills and the Kennedys by Thomas Maier. The paperback is being published this October.
Humor, wit, and exquisite timing were all effective political weapons for British Prime Minister Winston Churchill and President John F. Kennedy throughout their dazzling twentieth-century careers.
At the 1958 Gridiron Club dinner in Washington, for instance, presidential hopeful JFK deftly used humor to defuse his multimillionaire father’s reputation as the campaign’s hidden hand. “I just received the following wire from my generous daddy – ‘Dear Jack, Don’t buy a single vote more than is necessary,’” Jack kidded, as the crowd laughed along. “I’ll be damned if I’m going to pay for a landslide!”
Without a hint of rancor or rivalry, Jack even teased about his father’s contentious time as U.S. ambassador in Great Britain. “On this matter of experience, I had announced earlier this year that if successful I would not consider campaign contributions as a substitute for experience in appointing Ambassadors,” he said in late 1960. “Ever since I made that comment I have not received a single cent from my Father.”
Like Churchill, Kennedy knew humor could disarm critics as well as bolster his dubious supporters. When Kennedy learned that Martin Luther King Jr.’s father, a Baptist minister, initially opposed him because of his religion, he quipped, “Well, we all have fathers, don’t we?” After former president Harry S.[CE1] Truman reluctantly endorsed Kennedy – “It’s not the pope I’m afraid of, it’s the pop,” explained the plainspoken Missourian – he earned Nixon’s ire for saying Republicans could go to hell. “While I understand and sympathize with your deep motivation,” Jack joked in response to Truman, “I think it is important that our side try to refrain from raising the religious issue.” Though Al Smith became embittered by the bigotry he faced in 1928, Kennedy consistently deflected opposition with his charm steeped in Churchillian humor. Nixon, with his tiresome intensity, could be a convenient foil. “Mr. Nixon, in the last seven days, has called me an economic ignoramus, a Pied Piper, and all the rest,” Kennedy informed a New York crowd just before Election Day. “I just confined myself to calling him a Republican, but he says that is getting low.” Among his staffers, Jack joked when the early poll numbers didn’t look very good, “Do you realize the responsibility I carry? I’m the only person standing between Nixon and the White House.”
In all of England, no one acted kinder toward the Kennedys than Lady Nancy Astor, the same powerful, wealthy woman whom Winston Churchill deplored. The legendary confrontations between Astor and Churchill, both sharp-tongued antagonists in Parliament, could be breathtakingly rude.
“If you were my husband, I’d poison your tea,” she told Winston on one occasion.
“Madam, if you were my wife, I’d drink it!” he retorted.
Churchill’s popularity among Americans stayed intact, even though his political career seemed over during his mid-1930s “wilderness years” in England. Some in the press pondered if Winston, born to an American mother, would ever consider running for president. “I have been treated so splendidly in the United States that I should be disposed, if you can amend the Constitution, seriously to consider the matter,” he joked. Perhaps most disheartening, the long ascendant arc of Churchill’s life in the public arena seemed over. He had switched parties repeatedly, from Conservative to Liberal and back again. “Anyone can rat,” he quipped, “but it takes a certain amount of ingenuity to re-rat.”

In the early days of World War II, during the bombing of London by the Nazis, Kennedy’s father, U.S. Ambassador Joseph P. Kennedy, often witnessed Churchill’s grace under pressure as the newly selected prime minister. On the Saturday night in June 1940 when they learned Italy’s Mussolini had joined Hitler in the fight against England, a blow that might have bowed another leader, Churchill managed to share some humor with the American ambassador, inviting him into the Cabinet room.
“Well, you certainly picked a nice time to be Prime Minister,” Kennedy said, in his smart-alecky American way.
Rather than being offended, Winston replied candidly, with his own sense of wit: “They wouldn’t have given me the Prime Ministership if there had been any meat left on the bone,” he conceded.
Inside the Churchill house during World War II, the prime minister’s daughter-in-law Pamela learned about politics from the master. From a short distance, she observed conversations between wartime leaders. She began to understand the personal qualities that made Winston inspiring to his nation. At a family dinner, Churchill talked of a possible invasion by the Nazis and that they might have to kill a German soldier bursting through their door. Pamela, full-bellied in her final month of pregnancy, realized her father-in-law “was in dead earnest and I was terrified.”
“But Papa, what can I do?” she asked anxiously, explaining that she didn’t know how to fire a gun. In a way somehow reassuring, Winston growled humorously, “You can always get a carving knife from the kitchen and take one with you, can’t you?”
Pamela Churchill Harriman later got a lesson in politics from another master. She served as U.S. Ambassador to France for President Bill Clinton. 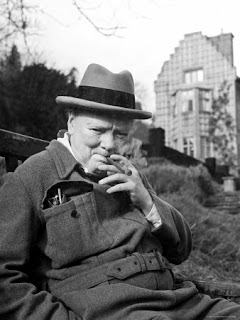