One of the most enigmatic ties to the Kennedys and Ireland is their relationship with Eamon deValera, the New York City-born Irish leader who saw JFK's election to the presidency in the broad sweep of Ireland's hsitory, essentially as the poetic ending to the massive Irish disaspora to America. The full private and public papers of De Valera are now catalogued and being published more than 30 years after his death. The archives in Dublin include this photo of De Valera meeting Jacqueline Kennedy shortly after the JFK assassination and his letter to the president's widow, expressing the grief of the Irish people. De Valera's relationship with the Kennedys is recounted in my book, including his dealings with Joseph Kennedy in the 1930s as US ambassador to Great Britain and also his discussions with a young John Kennedy in the 1940s, before he became an elected official. 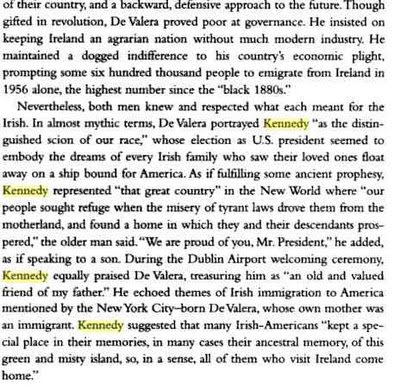