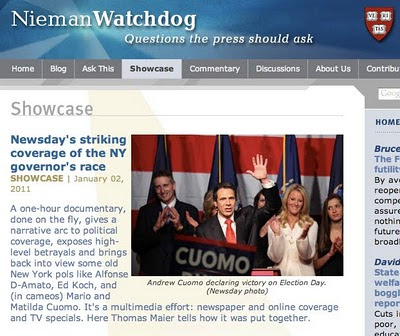 Harvard's Nieman Foundation's Watchdog website is highlighting Newsday's new documentary "Campaign Season" in its "Showcase" page. Here's what the Nieman intro says:
Newsday's striking coverage of the NY governor's race
SHOWCASE | January 02, 2011
A one-hour documentary, done on the fly, gives a narrative arc to political coverage, exposes high-level betrayals and brings back into view some old New York pols like Alfonse D-Amato, Ed Koch, and (in cameos) Mario and Matilda Cuomo. It's a multimedia effort: newspaper and online coverage and TV specials. Here Thomas Maier tells how it was put together.
- January 11, 2011 Links to this post