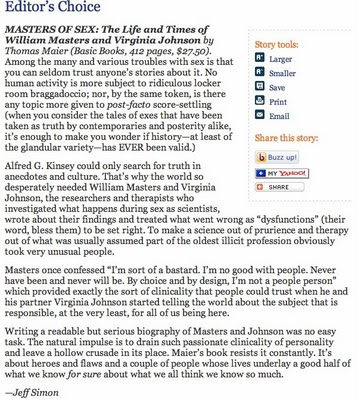 Editor’s Choice
MASTERS OF SEX: The Life and Times of William Masters andVirginia Johnson by Thomas Maier(Basic Books, 412 pages, $27.50). Among the many and various troubles with sex is that you can seldom trust anyone’s stories about it. No human activity is more subject to ridiculous locker room braggadoccio; nor, by the same token, is there any topic more given to post-facto score-settling (when you consider the tales of exes that have been taken as truth by contemporaries and posterity alike, it’s enough to make you wonder if history—at least of the glandular variety—has EVER been valid.)
Alfred G. Kinsey could only search for truth in anecdotes and culture. That’s why the world so desperately needed William Masters and Virginia Johnson, the researchers and therapists who investigated what happens during sex as scientists, wrote about their findings and treated what went wrong as “dysfunctions” (their word, bless them) to be set right. To make a science out of prurience and therapy out of what was usually assumed part of the oldest illicit profession obviously took very unusual people.
Masters once confessed “I’m sort of a bastard. I’m no good with people. Never have been and never will be. By choice and by design, I’m not a people person” which provided exactly the sort of clinicality that people could trust when he and his partner Virginia Johnson started telling the world about the subject that is responsible, at the very least, for all of us being here.
Writing a readable but serious biography of Masters and Johnson was no easy task. The natural impulse is to drain such passionate clinicality of personality and leave a hollow crusade in its place. Maier’s book resists it constantly. It’s about heroes and flaws and a couple of people whose lives underlay a good half of what we know for sure about what we all think we know so much.
—Jeff Simon
Email Post
Labels: "Masters and Johnson" "Masters of Sex" Review Sex sin passion love therapy biography history feminist orgasm female sex "book club" chick lit The Buffalo News: Editor's Choice