Kathleen “Kick” Kennedy, the favorite sister of future U.S. president John F. Kennedy, and Pamela Churchill, the daughter-in-law of British Prime Minister Winston Churchill, enjoyed one of the closest relationships between the two world famous families -- one filled with passion, politics, humor and ultimately tragedy. This is an excerpt from “When Lions Roar: The Churchills and the Kennedys” by Thomas Maier.


After the war, Kick Kennedy and Pamela Churchill’s friendship grew closer. They were no longer vaguely familiar debutantes with little in common but rather an American widow and British divorcée, both in their mid-twenties, whose experiences and social circles in war-torn London had bonded them together.
With her family in America, Kick still maintained the good-girl veneer that her mother insisted upon. On her own in London, she’d become more independent-minded, especially after the death of her husband Billy Hartington during the war. Though she didn’t approve of every adulterous move by Pamela, Kick appreciated the other woman’s spirited, devil-may-care approach to life. For all the friendship and favors Pamela Churchill provided in London, Kick Kennedy felt compelled in 1946 to invite her for an extended wintertime vacation in Florida. Kick “was my close friend and that’s how I came into the Kennedy family,” Pamela recalled decades later. “The first time I ever came to America, I stayed with the Kennedys down in Palm Beach.”
As an honorary Kennedy, Pamela found herself enthralled by the family’s dinner table conversation about politics. She went shopping with Rose Kennedy and appeared in the local newspaper columnist’s list of “Best Sundressed Women in Palm Beach,” even though she appeared “quite pale when near the other deeply tanned beauties.” With Kick and her parents, Pamela also enjoyed the Sunday races at Hialeah. After enduring so many wartime hardships and material restrictions in England, Pamela was amazed by the extravagant wealth and undisturbed beauty of America.
When the former prime minister arrived in Florida, Kick joined the Churchills as part of their entourage. She rode with them in a special car, escorted by twenty policemen on motorcycles, to the Orange Bowl stadium, where they watched Winston receive his honorary degree from the University of Miami. Afterward, Kick joined the Churchills at the Surf Club. Under a cabana at this private resort, Winston took out his oils and composed a painting of the endless blue-green Atlantic and darkened clouds on the horizon giving way to daylight. On this warm afternoon, the Churchills brought along their bathing suits and decided to go for a swim. “Winston presented a very comical sight, bobbing around in the surf,” Kick wrote in her diary. “He adores the water though I must say I wouldn’t enjoy swimming in such a public spot every day.”
As they entertained themselves at the Surf Club, Kick laughed along with the prime minister, flashing her wry smile and throwing back her thick and curly auburn hair. Unlike during her war years riding a bicycle in a Red Cross uniform around crumbled London, Kick, with her distinctive beauty in the Florida sun, now appeared more womanly than girlish, whether wearing pearls with a summer dress or all wet in her polka-dot swimsuit.
Eventually, Winston inquired about Kick’s father, with whom he had a tense encounter a few weeks earlier at Hialeah Park.
“He sends you best regards,” Kick answered.
Winston’s face soured. “He makes an exception in my case,” he said with a harrumph. The two men had a bitter falling out over the war, with Joe Kennedy opposing the war that ultimately claimed his oldest son, Joseph Jr.
The ambassador wasn’t pleased when his daughter, with some bemusement, repeated Winston’s comment to him. “Daddy took umbrage at this remark,” she noted in her diary.


In postwar London, several of Randolph Churchill’s Oxford friends and commando veterans visited the white Georgian house on Smith Square owned by Kick Kennedy, the widowed Lady Hartington, a lively parlor for politics, the literary arts, and forgetting the heartbreaking past.
In Kick’s new home, located near St. John’s Church, where her friend Pamela Churchill had married Randolph years earlier, the two young women shared many laughs and gossipy stories about the Churchills and the Kennedys. “Kick’s house is really very cute, very nicely furnished,” described her sister Eunice during an October 1946 visit. “We hold a salon every night from 6 to 8 here at home; otherwise you can’t tell where we might be.” One constant visitor, Seymour Berry, the best man at Randolph’s wedding, dated Kick frequently enough that some friends thought they might get married. In this same circle of friends was Freddie Birkenhead (son of Winston’s best friend, the late F. E. Smith), who had served in Croatia with Randolph and Evelyn Waugh. By far, Waugh was the best known of Randolph’s friends to attend Kick’s dinner parties, and the most opinionated. While he found Kick attractive, Waugh thought the sentimental oil painting she kept on her wall of her dead husband, Billy (commissioned from an old photo of him in uniform) was “most God awful.”
As a Catholic convert, Waugh considered the Hartington wedding as unholy, a selfish act of apostasy. At one party, he sat next to Kick and gave her a lecture on Catholic marriage law. She seemed amused enough by this celebrated novelist not to take offense. Evelyn, who regained the roly-poly weight he’d lost during the war, mistook her attention for infatuation and noted, “The widow Hartington is in love with me, I think.” With Frank Waldrop, her old Washington newspaper editor, she later laughed about Waugh’s moralizing until she suddenly stopped. “You know, Frank, I had only five weeks with my husband,” she lamented, “and now he is gone.”
Inside her London group of acquaintances, William Henry Lawrence Peter Wentworth-Fitzwilliam, the Eighth Earl of Fitzwilliam (simply “Peter Fitzwilliam” to friends) emerged as the most intriguing and fateful for Kick. Her attraction to this swashbuckling, wealthy, and married war hero—far different in character from Billy Hartington—would lead to a secret love affair that once again caused conflict within the Kennedy family. Kick first met Fitzwilliam, the son of one of England’s richest families, at a June 1946 victory ball honoring the commandos. During the war, Randolph, Waugh, and Fitzwilliam, all drinking buddies from White’s, served together in the Middle East. Indeed, on the boat ride to Cairo, it was Fitzwilliam to whom Randolph lost a huge sum in a poker game—a financial crisis that ruptured Randolph’s marriage with Pamela and only added to Fitzwilliam’s notoriety as a gambler. In a begrudging tone, Waugh referred to Fitzwilliam as “king dandy and scum.” 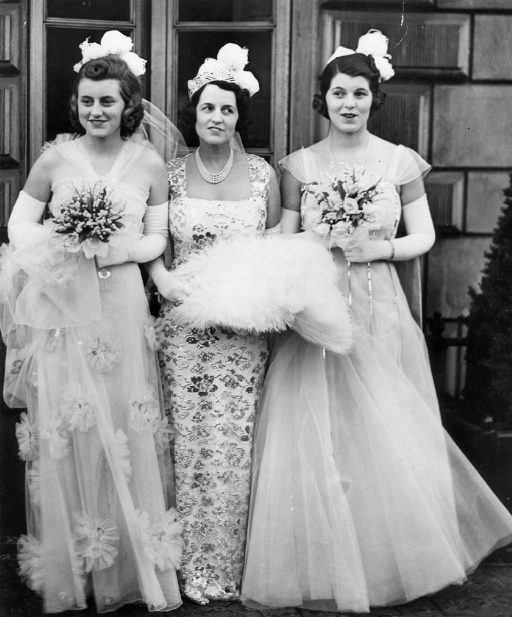 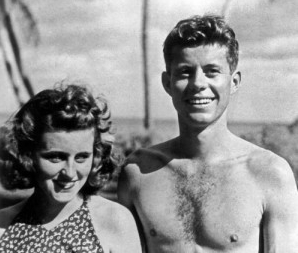 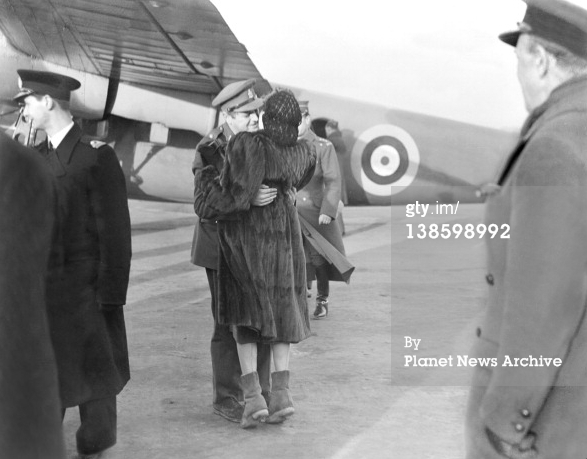 
To her divorced husband, Pamela admitted her life had been tougher than she expected after leaving the Churchill family’s protective bubble. Floundering in his own way, Randolph recognized how much both his parents still adored Pamela with their young son, Winston, and that perhaps his own rudderless life might be given new direction if they got back together as a family. Following Kick’s burial, Randolph proposed a reconciliation with Pamela. He arranged for a weekend getaway at the castle-like home of a friend, with champagne on the ready. Like a newlywed, Randolph hoped for a second honeymoon with Pamela, and used all his oratorical skills to plead his case. They talked about their mutual employer, newspaper baron Lord Beaverbrook, and how Winston’s wealthy ally had come to control so much of their lives, just as Randolph once feared. The war had ruined so many marriages, but Randolph argued that theirs could be salvaged, if only she believed in him.
As they drove a sedan into the countryside, however, Randolph got lost, and Pamela slowly came to her senses. She realized he was no longer the charismatic Adonis figure of his youth, but a lonely, bloated thirty-seven-year-old man with receding gray hair and an uncertain future, who seemed not to have learned any lessons from the past. For all his kindnesses, Randolph could easily revert to being a self-centered lout, looking for a maid rather than a wife. No matter how vulnerable she might feel, Pamela concluded that she was better off without him.
Memories of Kick remained buried with her at Chatsworth. With no more familial ties in London, Joe and Rose Kennedy focused their attention almost exclusively on Jack’s career in America and the admirable lives of their other children—such as Robert, for whom England was a more distant memory. “He [Bobby] is just starting off and has the difficulty of trying to follow two brilliant brothers, Joe and Jack,” the senior Kennedy wrote to Beaverbrook in 1948, thanking him for an encouraging note sent to his third son. “That in itself is quite a handicap, and he is making a good battle of it.” 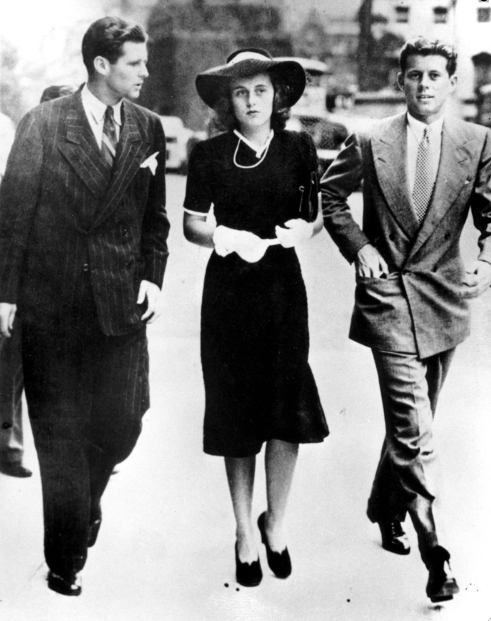 Jack’s memories of Kick and Joe Jr. in England taught him to embrace the immediacy of life, rather than any doctor’s prediction of imminent death. No one had believed in Jack more than his favorite sister, Kick. He had trouble sleeping at night, dreaming about her. “If something happens to you or somebody in your family who is miserable anyway, whose health is bad, or who has a chronic disease or something, that’s one thing,” Jack explained years later to James MacGregor Burns. “But, for someone who is living at their peak, then to get cut off—that’s the shock.”
Jack returned to London that summer but found it too wrenching to visit Kick’s grave at Chatsworth, which bore the epitaph “Joy She Gave, Joy She Has Found” etched on her tombstone. It fell to Jack to help settle Kick’s estate. He sorted through various entanglements of his sister’s life even more complicated than his own. After meeting with Kick’s housekeeper, learning more details of his sister’s love affair with Fitzwilliam, he instructed, “We will not mention her again.”
In years to come, the loss of Kathleen remained too painful for Joe and Rose Kennedy to discuss among themselves or with others, including their children. Rose turned again to her Church for solace and, ironically, relied on her newfound friendship with the Devonshires, the Protestants she once dreaded as in-laws, to settle the remaining loose ends of Kick’s life. “We have received most of the things in America, except two pictures given to her by Pamela Churchill,” Rose told a lawyer disposing of Kick’s belongings in London. “I believe the Duchess of Devonshire is holding them for me.” Without the deep faith his wife sustained, Joe never felt more despondent. The grand dreams built around his most stellar children no longer existed. “The sudden death of young Joe and Kathleen within a period of three years has left a mark on me that I find very difficult to erase,” Joe explained to Beaverbrook. “What a horrible mess the world is in. I am afraid I see very little hope on the horizon.”


At Christmas that year, when Pamela Churchill contacted him, Joe Kennedy was still morose. Yet he tried acting cheery for his daughter’s friend, giving out his overfamiliar brand of fatherly advice. “I am afraid that Palm Beach is never going to be the same without Kick,” he confided. “Of course, I hear about you every now and then, but usually that some rich fellow is passionately in love with you. I don’t blame them, but it is about time you gave some of these Americans a chance. Unless you hurry, there won’t be any rich ones left.”