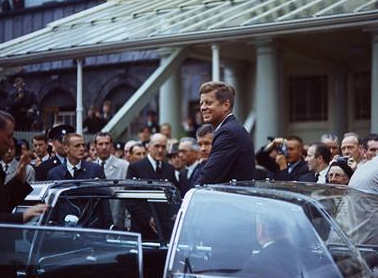 At the JFK Library in Boston, there's a display "John F. Kennedy and Ireland" that examines the influence of his Irish-Catholic immigrant background. This week marks the 45th anniversary of JFK''s extraordinary trip to Ireland in June 1963, a few months before his assassination. My newly re-issued biography, "The Kennedys: America's Emerald Kings", goes much further in examining the impact of the family's Irish Catholic immigrant roots on their public and private lives.

Here's a few snippets from the JFK Library on-line display:

During President Kennedy’s historic visit to Ireland in June 1963, he remarked to the people of New Ross, Ireland:
“When my great grandfather left here to become a cooper in East Boston, he carried nothing with him except two things: a strong religious faith and a strong desire for liberty. I am glad to say that all of his great-grandchildren have valued that inheritance.”

“If the day was clear enough, and if you went down to the bay and you looked west, and your sight was good enough, you would see Boston, Massachusetts,” President Kennedy said at the time. “And if you did, you would see down working on the docks there some Dougherty’s and Flaherty’s and Ryan’s and cousins of yours who have gone to Boston and made good.”