History with a little bit of wine in the Hamptons this weekend. 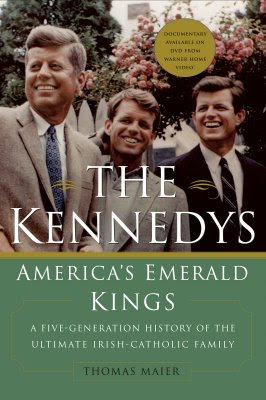 History with a little bit of wine in the Hamptons this weekend. We'll be talking about the Kennedy and the Bush political dynasties this Sunday and I'm all revved up to throw in my two cents.
The newly-issued edition of "The Kennedys: America's Emerald Kings" is coming out in two weeks, along with a brand new Warner Home Video documentary this fall based on the book. As a warm-up, I'll be appearing Sunday, June 29 at Palmer Vineyards "Writers on the Vine" series hosted by Larry Davidson, along with author and journalist Craig Unger. We'll be talking about politics, the media and the role of the Kennedys and Bushes legacies in the 2008 presidential campaign.
Here's the details:
Sunday, June 29th, "Writers on the Vine", Palmer Vineyards, 11:00 am - 1:00 pm
Topic: Then and Now
Thomas Maier, "The Kennedys: America's Emerald Kings"
Craig Unger, "The Fall of the House of Bush". Unger is a New York Times Best-Selling author and a frequent analyst on CNN and other broadcast outlets. He has written for "The New Yorker", "Esquire" and "Vanity Fair".
Directions to Palmer Vineyards: LIE to last exit (exit 73). Continue east on RT 58 to Osborne Ave. Turn left. Drive to end (Sound Ave). Turn right. Drive 6 miles to Palmer Vineyards, on the left.
From the South Shore:
Route 27-Sunrise Highway to 24 North. 24 North to Route 105 North. Right on to 105. Take 105 to the second light, Route 43. Make a right on Route 43 and go to the end, Sound Ave. Make a right on Sound Ave. The Winery is 1 1/2 miles on the left.
Email Post
Labels: "The Kennedys: America's Emerald Kings" Larry Davidson Thomas Maier Writers on the Vine