After Si Newhouse, Who's Next? 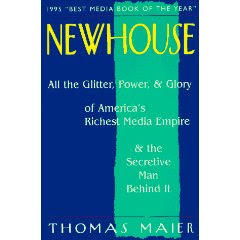 So who will take over from S.I. Newhouse at the Conde Nast media empire someday?

Today, speculation revolves around how much longer Mr. Newhouse will maintain his desk in the executive suite. In the 1990s, Jonathan Newhouse, a first cousin who runs Condé Nast International in London, was widely seen as the heir apparent.
In this decade, that designation shifted to Steve Newhouse, one of Donald’s sons, who, as chairman of Advance.net, has overseen all of Advance’s Internet operations since the 1990s. Both ideas are simply wrong, according to Steve Newhouse, Mr. Townsend and some other top executives. Instead of a single heir to Si, they say, a team of people will be running the show. 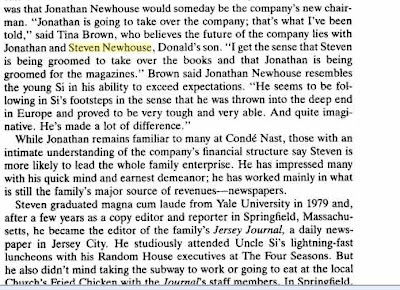 Notice the attribution in the book -- Good Old Tina Brown,

the only one brave enough to talk to Si's biographer at the time. Mmmm........what ever happened to Tina? Oh well, Mr. Perez-Pena, for essentially repeating our book "Newhouse" and making no mention of it so our Amazon number might go up, we say no soup for you at the Four Seasons!