Best Conde Nast Covers Ever, Before and Since Si Newhouse- Top 10 List, According to No Particular Rationale Except Whim (sort of Like You-Know-Who!) 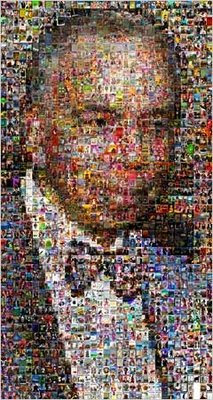 The brouhaha over The New Yorker's satirical cover of Sen. Barack Obama and his wife -- as well as the portrait of Si Newhouse in Sunday's New York Times, composed from Conde Nast magazine covers -- got us to thinking what were the best ever covers from this magazine giant? Do any of the Conde Nast crop beat the Esquire covers from the days of Harold Hayes? What about the sardonic covers of The New Yorker over the years? The fashionable excess of Diana Vreeland, the perfect pitch of Tina Brown for the zeitgeist, the Hollywood lovefests of Graydon Carter, and the green "enviro" covers, the political figures and the sports celebs in unfamiliar poses, and constant flash of flesh are all part of this ensemble. Of course, what sells on the newstand is undoubtedly part of the Newhouse equation, but we don't have access to Si's circulation numbers.
Nevertheless, there's loads to pick from. Here's our top 10 Conde Nast/Newhouse magazine covers:

- The Reagan Cover. As recalled in my "Newhouse" book, the June 1985 cover photo by Harry Benson captured the Reagan era as well as any photo. It also helped put the recently-revived Vanity Fair on the map and made Tina Brown into a media darling.

- The "Vogue" years of Diana Vreeland carried a certain classy timeliness, a look that calls to mind the late 1950s and early 1960s era that is now captured by the "Mad Men" cable television show.

- This 1976 Saul Steinberg cartoon cover captures The New Yorker at its fat and happy best under the William Shawn era, about a decade before Si Newhouse bought the magazine. This cover lined more dorm walls in the '70s than Farrah Fawcett. - Does Demi Moore know how to sell a cover? With more than a little help from Tina Brown, the early drab photo of Demi promoting some crybaby movie with Rob Lowe was suddenly transformed into a superhero Demi, with her costume painted on, and then SuperMom Demi, bursting in all her prenatal glory.

-OK, maybe this wasn't one of GQ's best covers, in fact, pretty awful considering the subject matter. But, let's face it, we tossed it in only because we have a new update Kennedy book to sell!

-When Art Cooper took over GQ, the old magazine for dandies went on steroids, with enough muscle to outshine Esquire and other rivals during the 1990s. No other cover captured the early spirit of the Clinton years as did this cover, featuring Al Gore as Robin to Bill's Batman.

Are there any really memorable covers for Glamour, Mademoiselle, House and Gardens and other service mags run by the Conde Nast, probably so, but we couldn't find them. So we included this manual for those who would try and capture a timeless shot for Glamour.

Wired magazine, purchased by Newhouse during the high-tech boom, has recently shown some of the old pizzazz with its covers, but still nothing like this 1997 pre-Newhouse cover heralding the second coming of Steve Jobs at Apple.

Before the New Yorker's Obama cover this past week, the most similar cover was a 1993 diddy by Art Spiegelman, drawn during the height of the Crown Heights riots between Hasidic Jews and African-American neighbors in Brooklyn. Still, this was small potatoes compared to the reaction of the Obama cartoon. If there was one particular cover that the late Alex Liberman, the late Helmut Newton and the very alive Anne Wintour could agree on it's this one, featuring perennial favorite Vogue model Kate Moss wearing the white fur hat (for Alex, one of the White Russians crowd) and the black leather favored by Newton in the 1980s cover with Claus Von Bulow.