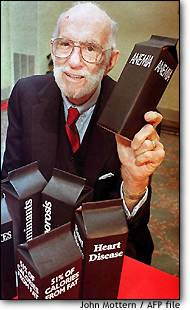 Ten years after his 1998 death, Dr. Benjamin Spock is still at the vanguard of American child-rearing advice. His very early and very forceful advocacy of reducing the amount of whole milk and fatty foods in the diets of kids was met in the 1990s with a howl of disapproval, ranging from the dairy industry to fellow doctors.
Now, lo and behold!, the American Academy of Pediatrics is issued much stronger concerns about childhood obesity, the cholesterol in their diets, and the long-term health dangers it poses. This is an extraordinarily important public health issue -- just think of all those swimming pools this summer with kids with rolls of fat around their middle -- and Dr. Spock's advocacy helped paved the way. Like much of Spock's advice, this concern comes from his own personal experiences.

Starting with the first edition of his book in 1946, Dr. Spock always recommended meat and milk products as part of a child's diet. Dr. Spock's revisions of what had been his most recent advice -- to include small amounts of lean animal foods in children's diets -- stemmed from a switch he himself made to an all-plant diet in 1991, after a series of illnesses that left him weak and unable to walk unaided. His wife, Mary Morgan, said that after he made the dietary change, he lost 50 pounds, regained his ability to walk and became healthier over all.
''It enabled him to revise his book before he died, which was his most important goal,'' Ms. Morgan said.
Dr. Neal Barnard, president of Physicians for Responsible Medicine, an organization in Washington that advocates strict vegetarian diets for everyone, said that he had drafted the section on nutrition in the new edition but that Dr. Spock had edited it to give it ''his personal touch.''
Ms. Morgan said that ''Ben had a hand in every part of the book'' and that he was ''very committed'' to the diet.
Dr. Parker, the book's co-author and an expert in behavioral pediatrics at Boston Medical Center, suggested that parents at least be offered two alternatives. But Dr. Spock rejected this idea, stating in a letter to Dr. Parker that he wanted his book to be ''in the forefront'' of the growing awareness of the link between animal foods and disease.
Dr. Parker said Dr. Spock believed that his vegetarian diet ''had given him a new lease on life.''

I know from my personal interviews with Dr. Spock in the three years before he died just how much he was committed to this issue. In reading today's news dispatches, more than 10 years after Ben was reviled in the press for this advice, it made me smile and remember just how brave and pioneering Ben could be.
Email Post
Labels: American Academy of Pediatrics Ben Spock Benjamin Spock Child Obesity cholesterol Dr. Spock fat infant Jane Brody kids paediatricians vegeterian whole milk