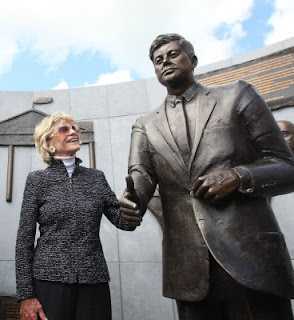 Our friends in Ireland write to let us know of last week's unveiling of the JFK statute at New Ross, where President Kennedy visited during his historic 1963 trip. Here's the press release about that event:

New Ross, Co Wexford, Ireland yesterday (Sunday 29th June 2008) unveiled during a gala ceremony a life-sized bronze sculpture dedicated to President John F. Kennedy on the occasion of the 45th anniversary of his historic three day visit to New Ross and Ireland. This is the only statue on the island of Ireland dedicated to the memory of President John F. Kennedy. Many details of this 1963 JFK trip are recalled in my book, The Kennedys: America's Emerald Kings.
Former United States Ambassador to Ireland, Jean Kennedy Smith, attended the ceremony as a special guest of honour and performed the unveiling. In what was an emotional remembrance of her brother and his immense contribution to the important relationship between Ireland and the United States, she shared her own personal thoughts on President Kennedy’s historic visit to New Ross and the legacy of his presidency on both sides of the Atlantic.
Jean Kennedy Smith commented during the ceremony on her brother’s visit to Ireland, "It was the first time a sitting American president had visited Ireland. He enjoyed his trip to Ireland more than any other of his presidency. There was no doubt in any of our minds just how much of an impact that trip had on him. "
She went on to say about her brother, Senator Ted Kennedy, who is recovering from serious brain surgery, “He’s good, he’s terrific, he’s a great sense of humour, he’s strong, everything has gone as hoped.”
Following the unveiling, at the Kennedy Homestead, Dunganstown, an afternoon tea party was hosted by the Irish branch of the Kennedy family. It was here that President Kennedy was guest of honour at a tea party hosted by his Irish relatives and friends during his visit.
Email Post
Labels: "The Kennedys: America's Emerald Kings" 1963 Boys of Wexford Ireland Irish Jean Kennedy Smith JFK John F. Kennedy Kennedys New Ross Northern Ireland