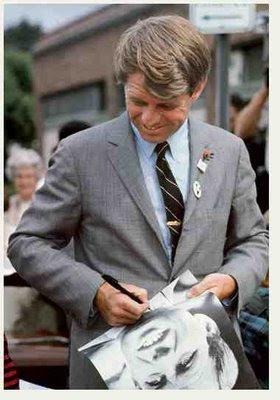 Forty years later, two books about Bobby Kennedy and his star-crossed 1968 campaign capture much of the enduring idealism of Kennedy's legacy. Thurston Clarke writes about RFK's last and most memorable campaign, and the photo book by Bill Eppridge, with a foreward by Pete Hamill, also reflects those times.
My own newly-reissued book, "The Kennedys: America's Emerald Kings," also tries to express this idealism while describing the mix of influences that Bobby Kennedy had become:
"As a senator, Robert Kennedy’s concerns revealed him to be a socially conservative Catholic as much as a disciple of liberal orthodoxy. He questioned the role of the federal welfare system and its impact on poor families, and he stressed the need for neighborhood control in running schools and antipoverty programs. His appeals to the conscience rather than to convenience seemed to assume that every citizen was able to feel responsibility as well as pleasure. He implored a materialistic American society to be more charitable, yet he believed that government handouts were ultimately corrupting. These infusions of spirituality into his down-to-earth politics were captured in an oft-quoted speech in South Africa, where Kennedy beseeched: “Each time a man stands up for an ideal, or acts to improve the lot of others, or strikes out against injustice, he sends a tiny ripple of hope, and crossing each other from a million different centers of energy and daring those ripples build a current which can sweep down the mightiest walls of oppression and resistance. Increasingly, his politics, like his religion, became visionary rather than dogmatic."
The journey of Bobby Kennedy is what's most fascinating, a man compelled by his beliefs in the end. As the Chicago Sun-Times said in its review of Clarke's book:

Always pungently observant, Alice Roosevelt Longworth, the daughter of Theodore Roosevelt, came up with an apt description of Robert Kennedy as he campaigned in 1968: “Bobby could have been a revolutionary priest.’’