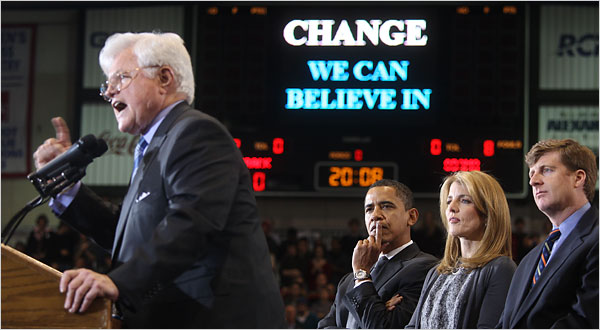 The Democratic Convention may be a 'last hurrah' for Sen. Edward Kennedy and the legacy of the Kennedy family, suggest some pundits this weekend. Below is an AP video of Kennedy's political impact. One of the ironies of the 2008 campaign is that Hillary Clinton, subbed by Sen. Kennedy who endorsed Barack Obama, may assume the role of Senate deal-maker that Ted played for years. And here's what David Lightman of McClatchy newspapers wrote:

Sen. Barack Obama is in many ways the successor to those dreams. Ted Kennedy endorsed him early in the primary season, and Caroline Kennedy, President Kennedy's daughter, is on Obama's vice presidential selection team.
Still, the Democratic presidential candidate must tiptoe across a political tightrope. The Kennedys help him tap into an important, passionate political constituency, not to mention the money and expertise their network brings.
"There is a resonance with the Kennedys that motivates people to act on the basis of compassion," former Kennedy aide John Seigenthaler said.
But in some circles, the Kennedys remain political anachronisms, liberals long ago shorn of their charisma.
The evidence: Efforts by Kennedy children and relatives to win political races have languished, other than congressional seats with strong, sympathetic New England Democratic constituencies.
In 2002, Robert's daughter Kathleen Kennedy Townsend became the first Democrat to lose a race for the governorship of Maryland in 36 years. In Massachusetts, Joe Kennedy, Robert's son, has declined several times to run for governor; in 1997, he dropped his bid saying personal and family problems were hurting his candidacy.
Monday, the analysts say, Democrats must leave the audience remembering Ted Kennedy as not only the last lion of liberalism, but also a man whose hope will outlive him.