With a big fat "I told-you-so" grin, we can't help but like any bestselling book that cites "Dr. Spock: An American Life," seven times in the notes and bibliography. So that's one of many reasons to like Rick Perlstein's new "Nixonland", a sprawling historical account of Nixon's rise, fall, rise, and utltimate fall and what it all says about our country. I grew up thinking that Nixon was a brillant strategist whose downfall was attributed to being too smart by half. But as I've read more, I realize how much I overrated him. One of the dopiest Nixon ideas was the pledge to visit all 50 states during the 1960 campaign. It ran him ragged, leading to the horrible physical shape he was in when he debated the tanned and rested JFK.
Perlstein does a fine job of underlining the importance of Dr. Benjamin Spock's powerful moral impact during the 1960s protest movement and his influence on Martin Luther King in convincing him to speak out against that conflict. Here's some of what Perlstein has to say: 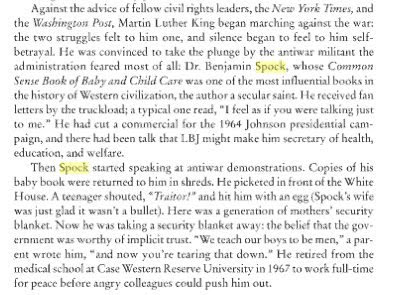