REVIEW: 'Primary' -- JFK in 1960 West Virginia Primary is Re-Issued; a Classic Great in Its Day But Creaks by Today's Standards 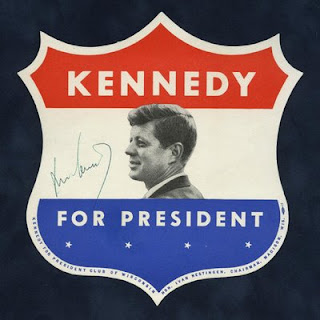 We watched filmmaker Robert Drew's remarkable cinema verite documentary of the 1960 West Virginia campaign called "Primary" which many have hailed as classic of the form. Throughout the film, JFK and Hubert Humphrey battle it out in a campaign where Kennedy's religion appeared to be insurmountable obstacle. (Just in case anyone was unsure who was the Protestant in the race, as my book reported, Humphrey's band kept playing "Give Me That Old Time Religion" at rallies!) The old black-and-white documentary was quite innovative in its day, but technology has so improved that the film looks its nearly half-century age. What is important to remember, however, is that Drew's film was the first of a new wave of cinema verite journalism rather than the last vestige of the old newsreel days.
Kennedy's money and organization eventually won the day in West Virginia. Now Drew's documentary is being re-issued, riding the crest of Obama fever in the air. Could another candidate from another minority background be elected this year just like the hero of Drew's film?
Here's what TimeOUT NY had to say:

n his 1960 effort, Drew captured what a politician and his potential First Lady look like just before they realize that they perhaps ought to keep their guard up. For instance, Primary contains a famous scene in which Jackie Kennedy is on a podium, facing a large crowd. Drew focuses not on her face, but on her white-gloved hands, fiddling nervously behind her back. He then cuts to the side of her the audience sees—her radiant smile.