VIDEO: Facing Bigotry, JFK Directly Deals with Catholic Religion Issue in 1960, Will Obama Bring Up Race In the Same Way? 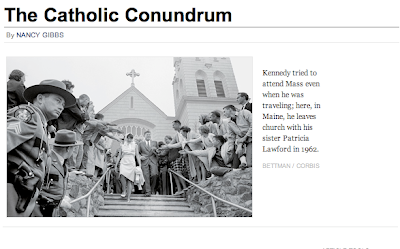 Comparison of race in 2008 and religion in 1960 is at the heart of the new preface to my re-issued book "The Kennedys; America's Emerald Kings", contrasting the campaign of President John F. Kennedy to current Democratic standard-bearer Barack Obama. Kennedy was well aware that bigotry towards Roman Catholics had help defeat the 1928 presidential bid of then-New York Gov. Alfred E. Smith, and Kennedy adroitedly addressed the issue several times during the campaign.

In his acceptance speech at the 1960 Democratic Convention, as this video show, Kennedy was frank about the relgious bigotry he faced:
"I am fully aware of the fact that the Democratic Party, by nominating someone of my faith, had taken on what many regard as a new and hazardous risk -- new at least since 1928. The Democratic Party has once again place its faith in the American people, and in their ability to render a free and fair judgment.'
"I hope that no American, considering the really critical issues facing this country, will waste his franchise and throw away his vote by voting either for me or against me because of my religious affilation. It is not relevant."

Ironically, the nation's leading prelate at that time, Cardinal Francis Spellman, who had married and baptized the Kennedys, wound up secretly supporting Richard Nixon because he felt his powers might be eclipsed and that JFK's hands would be tied because of the religious issue and not be able to help the church with its appeal for public support for parochial schools and other issues. So Obama wasn't the only candidate whose local spiritual leader gave him fits.
Email Post
Labels: 1960 election 2008 election Barack Obama bigotry Catholic Democratic Convention Irish Catholic JFK John F. Kennedy race racial bigotry Roman Catholic Video