Talking about God and Democratic politics isn't the usual television fare. The Blue Party in recent years has let the GOP frame such eternal social questions like 'What Would Jesus Do?' But here on the Colbert Report, of all places, Kathleen Kennedy Townsend, former Maryland Lt. Governor, bravely touts her new book tackling this subject.
I always liked her sense of humor. When I interviewed her for my bio, The Kennedys: America's Emerald Kings, Townsend laughed heartily at herself and other foibles, but spoke eloquently about how the family's Catholic faith informed RFK's decisions on race, immigration and his view of life. In particular, Robert F. Kennedy's friendship with Cesar Chavez seems like an odd couple, unless seen through the prism of Kennedy's understanding of his own family's history.
After the interview, Kathleen invited me to sit in her father's old red leather seat from his days in the Justice Department as JFK's Attorney General. I generally like to keep my objective veneer in place, but what the hell, right? I plopped right in the seat and smiled next to the very gracious Townsend. 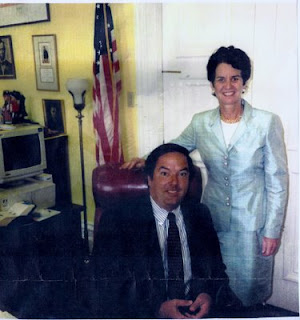