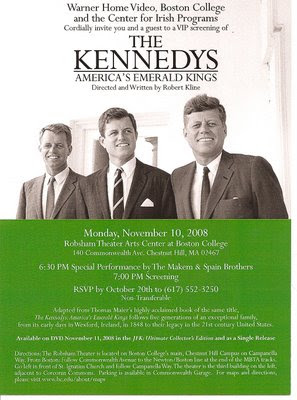 From the Irish Literary Supplement, Fall, 2008: Thomas Maier's book, "The Kennedys-America's Emerald Kings. encompassing a live generational family's journey starting from Wexford, Ireland to the United States in the twenty first century. Robert Kline, Executive Producer of Enduring Freedoms Productions and formerly Executive Vice President of 20th Century Fox, has produced a two hour documentary based on the book which will have its world premier on Monday November 10 at the Robsham Theatre on the Boston College campus. Hosted by the Center for Irish Programs, this premier screening will be followed the next day. November 11th, by the release of nearly one million DVD copies of the documentary which will be distributed and sold nationally by' Warner Brothers.

Here's the Makem Brothers in concert: