Warner marries new JFK disc with doc
Ultimate Collector's Edition will be released Nov. 11
By Laurence Lerman -- Video Business, 10/23/2008
OCT. 23 | Oliver Stone’s 1991 film JFK has been issued on DVD several times over the past decade, but never with the with the kind of collectability and supplemental sheen that accompanies it in Warner Home Video’s upcoming JFK: Three-Disc Ultimate Collector’s Edition. 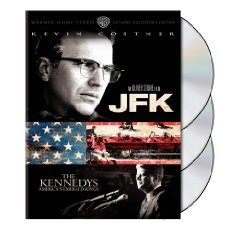 The highlight of the package—which includes the director’s cut of the film, a vintage documentary and featurettes, reproductions of Kennedy family and presidential photos, letters written by or to John F. Kennedy and more—is the new feature-length documentary The Kennedys: America’s Emerald Kings. Written, directed and produced by Robert Kline, the film will premiere on Nov. 10 at Boston College, a day before the Ultimate Collector's Edition is released. [Ed Note: In New York, it'll be shown at Fordham's Lincoln Center McNally Ampitheater on Nov. 12]
Find more videos like this on www.truveo.com.

The DVD set is priced at $39.98.
Kline is a former executive at 20th Century Fox, co-founder of the Lifetime Network and producer of Stone’s 1993 Vietnam saga Heaven & Earth. He based his Kennedy film on Thomas Maier’s 2003 book of the same name, which examines five generations of the renowned family.
“It couldn’t have been done without the total cooperation of the John F. Kennedy Presidential Library and Museum,” Kline told VB last week “They gave us a full-time archivist, and they never interfered creatively.”
As for the inclusion of the intensely researched documentary on the JFK: Ultimate Collector’s Edition, Jeff Baker, Warner’s senior VP/general manager of theatrical catalog, calls it “a marriage that a matchmaker dropped down from heaven.”
“We were planning on repromoting JFK anyway because of the 35th anniversary of the assassination,” he told us. “Oliver [Stone] gave us his blessing. He liked that we were marrying up his film with a documentary on the same subject. His visceral reaction was that it could be very interesting.”
America's Emerald Kings also will be available individually priced at $19.97.
Email Post
Labels: "The Kennedys: America's Emerald Kings" Boston College JFK Assassination John F. Kennedy Kennedy family Oliver Stone Ted Kennedy