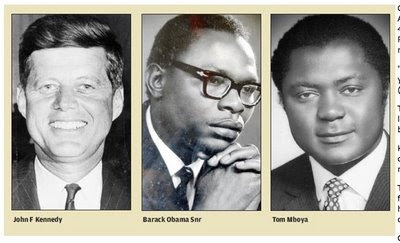 First NBC newscaster Tim Russert pointed out the 'prophecy' of Robert Kennedy in the 1960s about a African-American president being elected in 40 years. And here's an account of the Obama-Kennedy connections following his victory this week.

"Obama made history when he was elected the first US African-American president on Tuesday. The prophecy goes back exactly 40 years ago when a much-beloved American leader, Senator Robert F Kennedy, while mourning his brother’s assassination, made his prophecy on Voice of America in 1968. "There is no question about it," Kennedy said. "In the next 40 years, a Negro can achieve the same position that my brother (former President John F Kennedy) had." Those were troubled times in the US. White extremists were still lynching blacks in America’s South and segregation had only been abolished. Kennedy said: "Prejudice would exist and probably would continue ... but we have tried to make progress and we are making progress. We are not going to accept that status quo."
Email Post
Labels: Barack Obama Bobby Kennedy JFK John F. Kennedy Kennedys Kenya Meet the Press President Kennedy Prophecy Robert Kenendy Tim Russert Video