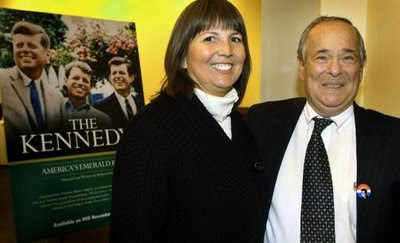 Here's what the Boston Globe says:
Director Robert Kline knows the Kennedys have been covered rather thoroughly, but he's hoping his documentary "The Kennedys: America's Emerald Kings," based on the book by Thomas Maier, brings something new to the discussion. "In the back of my mind, I always wanted to pay homage to the Kennedys," said Kline, the cofounder of Lifetime and former VP at Fox, who grew up in Ogunquit, Maine. The documentary, which had its world premiere at Boston College last night, focuses on little-seen private and political footage - some of JFK reassuring voters about his religion - and also gives deeper treatment to the Kennedy women. The film, which traces the Kennedys' path from Ireland to America's most powerful offices, will be distributed with a new high-def edition of Oliver Stone's "JFK," starting today. "It's not just good footage, it's great footage," Kline promised.
Email Post
Labels: "The Kennedys: America's Emerald Kings" Boston College Fordham JFK JFK Assassination Kennedys Oliver Stone Robert Kline Warner Bros.