Caroline Kennedy as NY Senator? Her Entry in Politics Was Predicted in "The Kennedys: America's Emerald Kings"

Caroline Kennedy's reported interest in the Senate seat of Hillary Clinton's is a remarkable turn of events. As you can see in the newly-updated version of my 2008 book "The Kennedys: America's Emerald Kings," -- now out with its own Warner Bros. documentary -- I underlined the potential that Caroline Kennedy someday follow the political legacy of her father, President John F. Kennedy. My sources during the research of this book told me that they felt Caroline might step forward, out of the reclusiveness favored by her mother, former First Lady Jacqueline Kennedy, and enter the political arena where she'd be embraced as JFK's heir. Apparently, her cousin, Robert F. Kennedy Jr., has indicated to the Times he's not interested at this moment in the Senate seat.
Here's what I said in my book about Caroline Kennedy, her interest in politics and public service, and the role of the Kennedy women in this generation of the family: 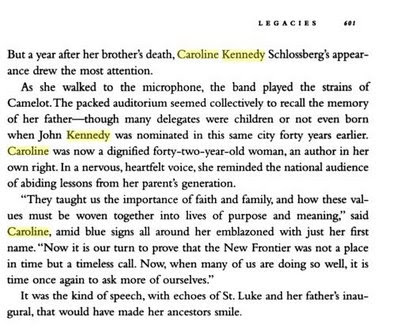