Richard John Neuhaus -- A Voice Always Worth Considering; His Comments about the Kennedys, Catholic Church and Irish 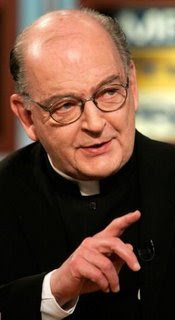 Richard John Neuhaus, who died Jan. 8, was one of the most articulate of the conservative theologians who emerged during the past half century in the Catholic Church in America. We shared the same publisher (Basic Books) with new books scheduled for this spring, and he made these comments in his publication First Things about my book, The Kennedys: America's Emerald Kings. Even when I didn't agree with Neuhaus, his was a voice always worth considering. Here's what he said about my Kennedy book in January 2004:

... The strength of the book is that it places JFK into five generations of Kennedy history, and concentrates on the specifically Irish Catholic—the two words being inseparable and sometimes indistinguishable—dimensions of the story. Of course, JFK looms largest in the tale, but Joe Sr. runs him a close second. Although he doesn’t put it quite this way, Maier, author of Dr. Spock: An American Life, aims at countering the ways in which the Kennedy myth has been made “respectable” by downplaying the Irish Catholic, presenting JFK’s career as a product of the brightest and the best. From the beginning, Maier convincingly shows, that career had a great deal more to do with the Knights of Columbus and Boston communion breakfasts than with Harvard or the New York Times. New to many will be Joe Sr.’s wheeling and dealing at the Vatican, and the very worldly roles played by some prelates who are depicted, I expect accurately, as being more pols than pastors. Until the bitter end, writes Maier, Cardinal Cushing of Boston was JFK’s “political guardian angel.” When it comes to making sense of it all, Maier seems ambivalent. He writes:
In the fairy-tale world of Camelot politics—not even in the “psycho-biographies” of his detractors—Jack Kennedy rarely appeared to worry about the truth or consequences of sex. The Roman Catholic Church was often an unabashed, albeit unofficial, ally for his ambitions and a compliant keeper of his secrets. To many established Catholics, Camelot was encased in fond memories, part of the climb out of the old ethnic neighborhoods of the past. “It may be hard to remember the impetus that Kennedy gave to a sense of Catholic ‘arrival’ in America,” observed theologian Richard John Neuhaus after so many of JFK’s transgressions were exposed. “Despite subsequent revelations about his private life (news photographers at the time, for example, agreed not to publish pictures of him smoking cigarettes), the Kennedy myth remains the forceful statement of Catholics having made it in America.”
But by the 1970s, the Roman Catholic hierarchy was no longer enamored with the Kennedy family or its politics. Many practicing Catholics felt increasingly alienated by the Kennedys, and they, too, seemed disillusioned by the rightward drift of their onetime followers. The Camelot myth remained strong in the minds of Americans, but it became a strangely secular one, no longer endorsed by churchmen such as Cushing but propagated by the media. For Jack’s survivors, particularly his youngest brother, American society’s obsessions with sex cast Camelot in an uncomfortable light, and gradually changed its meaning. Camelot came to signify the glories of a lost era, the blinding light of celebrity and having sex with other celebrities or sycophants. Rather than a high-minded call to public service, as Jacqueline Kennedy said she had intended, Camelot became a parable about excess and its consequences.
Yet the book ends with an admiring depiction of the remaining Kennedys making a joint appearance at the 2000 Democratic convention and the wan suggestion that somehow, despite all, Camelot as high-minded call to public service still lives. They are attenuatedly Irish and even more attenuatedly Catholic, but the author seems still to hope for another generation of “emerald kings.” As do enough Americans to provide a promising market for another big, perhaps unnecessary, but interesting book about the Kennedys.