The new downloadable audiobook version of "Masters of Sex: The Life and Times of William Masters and Virginia Johnson, The Couple Who Taught America How to Love," is now on sale. You can hear a sample of CHAPTER ONE, by going to this site and clicking on the player. 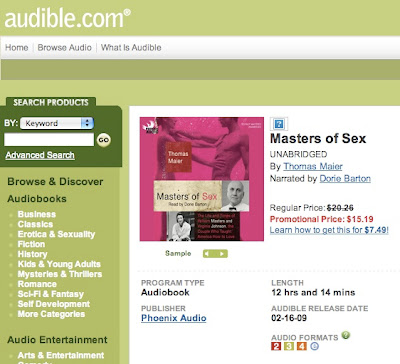 The book is read by Dorie Barton, whose voice very much captures the spirit of this book. As Barton's website says about her: " Dorie has been seen in myriad television shows, as both a series regular, in "Stark Raving Mad" with Tony Shaloub and Neil Patrick Harris, and recurring roles in "I'm With Her", "The In-Laws", etc., as well as many memorable guest-starring parts in shows including "CSI, and "Angel".

She has starred in several television films, her most prominent being her work as the young Martha Stewart, in NBC's biopic, "Martha, Inc.". Film work has ranged from independent films, to some of the Hollywood's biggest hits such as "Meet the Fokkers", and "Down With Love", etc."
Email Post
Labels: "Masters of Sex" Audible.com audio biography Dorie Barton love Masters and Johnson Thomas Maier Virginia Johnson William Masters