Can Psychiatrists Really "Cure" Homosexuality?
Masters and Johnson claimed to convert gays to heterosexuality in a 1979 book. But did they?
By Thomas Maier 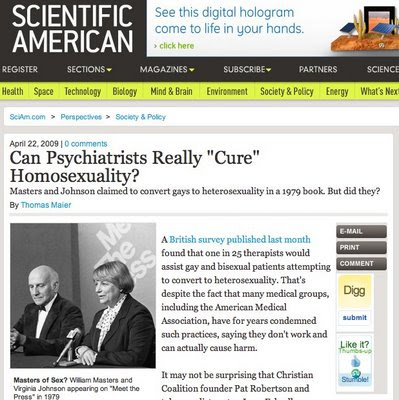 A British survey published last month found that one in 25 therapists would assist gay and bisexual patients attempting to convert to heterosexuality. That's despite the fact that many medical groups, including the American Medical Association, have for years condemned such practices, saying they don't work and can actually cause harm.
It may not be surprising that Christian Coalition founder Pat Robertson and televangelist pastor Jerry Falwell, among many others, have supported programs designed to convert homosexuals away from "sin" and into the arms of God-fearing heterosexuality. But what may surprise you is one of the research sources cited by the Catholic Medical Association in 2006 when it declared that science "counters the myth that same-sex attraction is genetically predetermined and unchangeable, and offers hope for prevention and treatment."
That source? William Masters and Virginia Johnson, a husband–wife team who are perhaps the world's most famous sex researchers.
Back in 1979, on Meet The Press and countless other TV appearances, Masters and Johnson touted their book, Homosexuality in Perspective—a 14-year study of more than 300 homosexual men and women—hoping to build on their groundbreaking sex studies of heterosexuals that had helped ignite America's sexual revolution. The results seemed impressive: Of the 67 male and female patients with "homosexual dissatisfaction," only 14 failed in the initial two-week "conversion" or "reversion" treatment. (The 12 cases of attempted "conversion" were for men and women who had always believed they were homosexual and were troubled by it, while the 55 "reversion" cases were in people who believed their homosexuality was more fleeting.) During five years of follow-up, their success rate for both groups was better than 70 percent.
But were Masters and Johnson's claims of "conversion" in those 12 cases -- nine men and three women -- even true?
Prior to the book's publication, doubts arose about the validity of their case studies. Most staffers never met any of the conversion cases during the study period of 1968 through 1977, according to research I've done for my new book Masters of Sex. Clinic staffer Lynn Strenkofsky, who organized patient schedules during this period, says she never dealt with any conversion cases. Marshall and Peggy Shearer, perhaps the clinic's most experienced therapy team in the early 1970s, says they never treated homosexuals and heard virtually nothing about conversion therapy.
When the clinic's top associate, Robert Kolodny, asked to see the files and to hear the tape-recordings of these "storybook" cases, Masters refused to show them to him. Kolodny—who had never seen any conversion cases himself—began to suspect some, if not all, of the conversion cases were not entirely true. When he pressed Masters, it became ever clearer to him that these were at best composite case studies made into single ideal narratives, and at worst they were fabricated.
Eventually Kolodny approached Virginia Johnson privately to express his alarm. She, too, held similar suspicions about Masters' conversion theory, though publicly she supported him. The prospect of public embarrassment, of being exposed as a fraud, greatly upset Johnson, a self-educated therapist who didn't have a college degree and depended largely on her husband's medical expertise.
With Johnson's approval, Kolodny spoke to their publisher about a delay, but it came too late in the process. "That was a bad book," Johnson recalled decades later. Johnson said she favored a rewriting and revision of the whole book "to fit within the existing [medical] literature," and feared that Bill simply didn't know what he was talking about. At worst, she said, "Bill was being creative in those days" in the compiling of the "gay conversion" case studies.
Until he died in 2001 Masters felt confident their book would be embraced eventually by the medical community, not just by purveyors of religious or political agendas. He believed the prospect of "conversion" therapy offered more hope, more freedom to patients than psychoanalysis ever could. "The criticisms are based on old concepts," Masters replied dismissively to the press. "We're reporting on 10 years of work with five years of follow-up—and it works."
But despite his claims, the success of Masters's "gay conversion" therapy have never been proved.
Email Post
Labels: "Masters of Sex" "Masters and Johnson" William Masters Virginia Johnson therapy Scientific American conversion gay conversion