NEWSWEEK: Masters of Sex is "exhaustive" bio that asks 'What is This Thing Called Love?' Are 20-Somethings better at true love than Boomer parents? 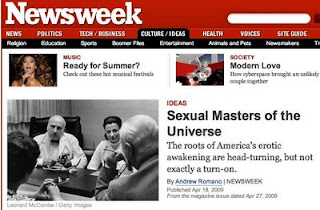 Andrew Romano
NEWSWEEK
From the magazine issue dated Apr 27, 2009
Bill Masters may have been the 20th century's most unlikely romantic. Bald, thin-lipped, stocky and bow-tied, with a white shirt, white ballpoint pen and starched white lab coat, the brusque St. Louis Ob-Gyn appeared almost antiseptic in person, and his milky, wandering left eye convinced most acquaintances that he was as cold and clinical as he looked. Then there was his day job. As the driving force behind Masters and Johnson, the biggest brand in postwar sex research, Masters spent 40 years exploring the physiology of coitus, often with the help of a vibrating optical dildo called Ulysses—hardly the most sentimental of occupations. Least amorous of all, though, may have been Masters's love life. In the late '50s, he persuaded partner Virginia Johnson to have sex with him, but only, he explained, "as a way of further comprehending all that they were learning through [laboratory] observation"; they remained together for more than a decade of extracurricular experimentation and, beginning in 1971, an additional 22 years of marriage, even though they "weren't emotionally tied at all," as Johnson later confessed. All of which is just to say that Masters wasn't the sort of sap you'd expect suddenly to announce, at the tender age of 76, that he was leaving Johnson to marry a recently widowed blonde named Dody Oliver whom he'd privately considered the "love of his life" since 1938, when they dated for a single summer. Except that on Christmas Eve 1992, that's exactly what he did. "I carried a torch for her for 55 years," Masters explained, giddy as a schoolboy. 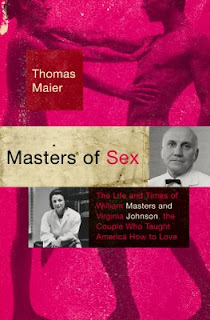 The story of Masters's secret sweetheart isn't the only scoop in Thomas Maier's exhaustive new dual biography, "Masters of Sex." (We learn, for example, that Masters probably fabricated case studies to support the "gay conversion" therapy advocated in the couple's third book, "Homosexuality in Perspective.") But for a reader like me, who's young enough, at 26, to look back and wonder what exactly the beaded, bearded, braless sexual revolution has to do with America's current attitudes toward copulation, it may be the most revealing. As the story of Masters and Johnson makes clear, rescuing sex from the ancient mists of myth, mystery and religiosity left America a happier and healthier place. And yet Maier's book—appearing in the midst of a minor Aquarian revival that includes a new edition of Gay Talese's "Thy Neighbor's Wife" and screenings last week in New York of "Carnal Knowledge" and "The Graduate" at the Museum of Modern Art's ongoing Mike Nichols retrospective—also suggests that our subsequent attempts to liberate sexual pleasure from the grip of fusty, old-fashioned love had much the opposite effect. Not every hang-up, it seems, should come unhung.
When Masters and Johnson began their research in 1957—they'd eventually observe an estimated 14,000 live orgasms—America's carnal knowledge was largely limited to the local priest's preachings on the subject, plus the occasional pinch of Freud or Kinsey. With the publication of "Human Sexual Response" in 1966 and "Human Sexual Inadequacy" four years later, however, the nation finally had a chance to learn the fundamentals of fornication: women can be multiorgasmic; intercourse may continue well into one's 80s; clitoral orgasms are hardly inferior to their vaginal counterparts; and so forth. The results, of course, were revolutionary, especially for women, and as Maier notes, the vast majority of couples benefited from Masters and Johnson's therapeutic touch. But despite its necessity, the revolution they unleashed led some libertines to view the bedroom as little more than a lab—a place, in short, where sex needn't be more than a pleasurable "mutual masturbation exercise," as Masters himself once put it. Which is when people started getting screwed.
In Talese's book, a riveting real-life account of America's erotic awakening, married L.A. insurance salesman John Bullaro indulges in an affair with co-worker Barbara Cramer that quickly leads to additional dalliances at Sandstone, a swingers' retreat founded by Cramer and her husband, John Williamson. Eventually the Sandstoners inform Bullaro's wife, Judy, of his infidelities; seeking her own share of liberation, she shacks up with Williamson on the hilltop compound. Divorce—not enlightenment—soon follows. "The Graduate" and "Carnal Knowledge" trace similar (if fictional) arcs: the forbidden intergenerational fling between Benjamin Braddock and Mrs. Robinson leaves both miserable, and the "virile, dominant" playboy Jonathan Fuerst winds up impotent and alone after decades of loveless affairs. Saddest of all, though, may be Virginia Johnson, who, as Maier writes, had "long separated [sex] ... from love." While many of her fellow explorers ultimately gravitated toward traditional relationships—the Bullaros married other people, Braddock rode off with the younger Robinson, and Hugh Hefner's first ladies, Barbi Benton and Karen Christy, went in search of real husbands—we last see the thrice-divorced Johnson cursing her former partner from the confines of a nursing home, where, as if to acknowledge a past that never was, she now goes by the name Mary Masters. 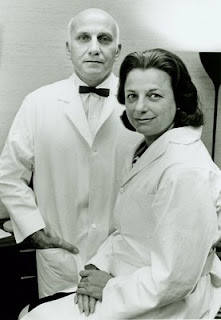 None of which is particularly surprising; free-love fallout has long been a cliché. What is surprising, however, is where our culture has come to rest after the sexual mood swings—from repression to release to the reactionary '80s, when AIDS and the Moral Majority reigned supreme—of the second half of the last century. The shift is most evident, I think, in how the youngest batch of sexually active Americans, the so-called millennials, approach sexuality. Unlike our grandparents, we're not shocked by cunnilingus, or masturbation, or pleasure that isn't strictly procreative, and for this rather healthy sense of perspective we have Masters, Johnson and our boomer parents to thank. But dig deeper and you'll discover that millennials are surprisingly turned off by—or at least not especially excited about—the prospect of loveless sex, which isn't quite what the Williamsons of the world anticipated.
Consider the stats. Today, less than half of all high-school students have done the deed: 47.8 percent as of 2007, according to the National Youth Risk Behavior Survey, down from 54.1 percent in 1991. Among 15- to 17-year-olds the numbers have fallen even further, from 40 percent or so in 1995 to about 30 percent now, which suggests that millennials are waiting longer to lose their virginity. Promiscuity is also on the outs: the percentage of teens who reported four or more partners dipped from 18.7 to 14.9 between 1991 and 2007, and the rate of teen pregnancy—a related phenomenon—has plummeted since the late 1950s, even as abortions have become rarer. The fact is, despite a rather high tolerance for superficial raunch—celebrity crotch shots, "sexting," Abercrombie & Fitch catalogs and whatever else is worrying parents and the press these days—my fellow Organization Kids have largely reacted against boomer excess (see: divorce rate, 50 percent) and increased risk (AIDS) by trending in their own bedrooms toward caution and commitment; only 42 percent of teens support casual sex, after all, down from 52 percent in 1987.
That's a welcome development, whether motivated by maturity or ambition. At the height of his fame, Bill Masters admitted, "I haven't the vaguest idea … what love is." Despite his discoveries—and the decades of erotic exploration that followed—we still aren't sure. But we have a better idea of what it isn't.
Email Post
Labels: "Masters of Sex" "Masters and Johnson" William Masters Virginia Johnson therapy love sex intimacy gay conversion Talese Newsweek