It's shocking to realize how little we knew about the physiology of sex—female sexuality, in particular—until the 1950s, when gynecological surgeon William Masters set up a semiclandestine laboratory at a university in St. Louis and, together with his assistant, Virginia Johnson, employed the latest technology (a plastic penis equipped with a camera!) and volunteer subjects to record what happens during the act. Illuminating the previously misunderstood and underestimated female orgasm, their findings (published in the 1966 best-seller Human Sexual Response) were an important factor in heating up the sexual climate of the 1960s. The increasingly successful researchers helped many grateful couples, who flocked to their clinic with their most intimate problems. But science failed to do much for Masters and Johnson themselves. Sex with her boss was understood to be part of the job description for Virginia Johnson, an attractive divorced single mother, yet when Masters finally left his wife for her, their marriage was a chilly professional partnership, sadly devoid of love—a mystery their experiments had left unexplored. Perhaps influenced by its steamy subject matter, Masters of Sex, Thomas Maier's new book about the couple's career, may strike some readers as unusually graphic for a biography, but this unsettling story of sex and science in theory and practice is ultimately more cautionary than titillating.
From the May 2009 issue of O, The Oprah Magazine 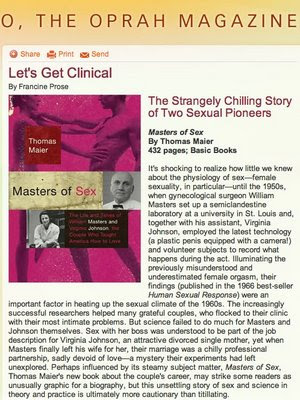