Scientific American: Hugh Hefner as Patron of Masters and Johnson, Book Launch for "Masters of Sex" At NY Academy of Medicine 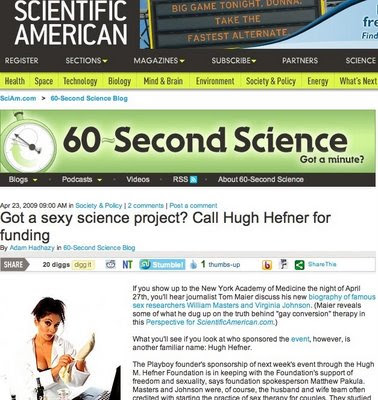 Got a sexy science project? Call Hugh Hefner for funding

By Adam Hadhazy in 60-Second Science Blog
If you show up to the New York Academy of Medicine the night of April 27th, you'll hear journalist Tom Maier discuss his new biography of famous sex researchers William Masters and Virginia Johnson. (Maier reveals some of what he dug up on the truth behind "gay conversion" therapy in this Perspective for ScientificAmerican.com.)

What you'll see if you look at who sponsored the event, however, is another familiar name: Hugh Hefner.

The Playboy founder's sponsorship of next week's event through the Hugh M. Hefner Foundation is in keeping with the Foundation's support of freedom and sexuality, says foundation spokesperson Matthew Pakula. Masters and Johnson were, of course, the husband and wife team often credited with starting the practice of sex therapy for couples. They studied the psychology and physiology of lovemaking from 1957 until the 1990s. (As for their own conjugal bliss, one can only speculate, but their marriage ended in an amicable divorce in 1992.)

Among their findings: Women can have multiple orgasms without a “refractory period” in between, unlike men, in whom many cases of impotence and premature ejaculation have a strong psychological basis.

Such sexy science is not the only apple of Hugh Hefner’s eye, however. According to the non-profit’s 2007 tax form, the organization has provided more than $225,000 in grants to a variety of institutions, a number of them science and medicine-based. Several thousands dollars went to Cedars-Sinai Medical Center and the National Asthma Association, for example.

The Hugh M. Hefner Foundation also lends financial support to the Guttmacher Institute, a sexual and reproductive health science research center, as well as progressive groups including NARAL Pro-Choice Foundation and Planned Parenthood. “We want to get good scientific information out to women so they can make reproductive health choices for themselves,” says Pakula.

The foundation also tries to make sure that becoming Miss March isn't the only career path for women, supporting the Women’s Business Development Center and Women Make Movies, a non-profit media arts organization promoting the making of movies about women by women (and no, not those kinds of movies).

Hefner also supports the arts with donations to, among others, the Los Angeles Philharmonic Association, the Berklee College of Music, and the Multicultural Motion Picture Association.

“People don’t realize Mr. Hefner’s philanthropic interests,” says Pakula. “It’s not a side of him that often gets covered in the press.”