American Prospect: "Masters of Sex is this spring's true must-read book for those looking to revisit the heady, early days of the sexual revolution." 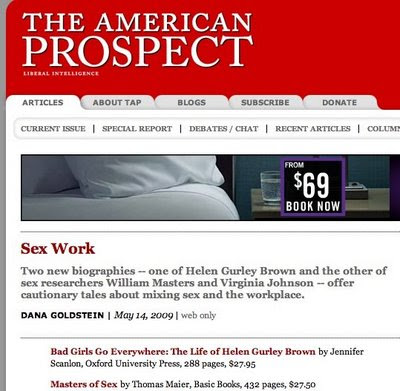 "I've never worked anywhere without being sexually involved with somebody in the office."
So said Helen Gurley Brown, editor of Cosmopolitan magazine for over 30 years, in a 1982 interview. When the reporter asked Gurley Brown if she had any ethical or feminist compunction about sleeping with a boss, she replied, "Why discriminate against him?"
This kind of glib, manufactured-to-shock statement was typical from Gurley Brown, who had nearly two decades of experience in advertising by the time she wrote her 1962 best-seller, Sex and the Single Girl. Gurley Brown knew how to market herself. One of three female copywriters at Los Angeles advertising firm Kenyon and Eckhart, Gurley Brown worked for a string of unsuccessful male bosses, yet never earned a promotion herself. At one point, management decided that despite her high-quality work, she was "overpaid," and cut her salary in half.
Frustrated, Gurley Brown focused on dating and began to pen vignettes about her personal life. At 31 and already considered an old maid by the standards of the 1950s, she wrote, almost proudly, that "every last one" of her boyfriends and lovers was married. Her response to the indignities of the glass ceiling wasn't to make a fuss demanding equality but to convince her male companions (often co-workers turned lovers) to buy each and every dinner, pay in full for every vacation, and shower her with luxurious gifts. In Sex and the Single Girl, Gurley Brown, by then 40 years old and married to super-rich movie producer David Brown, warned young women not to sell themselves short by going Dutch on dates. "Don't you dare!" she admonished.
In an adoring new biography, Bad Girls Go Everywhere, Jennifer Scanlon reopens the old debate about whether Gurley Brown can really be considered a feminist. That, of course, depends on one's definition of feminism. Undoubtedly, through her books and in the pages of Cosmopolitan, Gurley Brown encouraged young women to enjoy sex and to embrace, at least during their 20s, the single life. Her frank discussion of sexually active dating was offensive to many early-1960s readers and certainly pushed the culture toward accepting that even "good girls" engage in premarital sex. Considering Gurley Brown's influence, Scanlon, who previously wrote a cultural history of Ladies Home Journal, the staid magazine for housewives, goes to great lengths to portray Gurley Brown as a proto-second-wave feminist -- a sort of libertarian Betty Friedan, more concerned with fun than with whining about women's "victimization."
But it is only after immersing oneself in the back catalog of Ladies Home Journal that one could really mistake Cosmopolitan as radically feminist. Like Hugh Hefner, Gurley Brown was not just a magazine editor but the purveyor of a fantasy-lifestyle brand. The product Gurley Brown sold didn't purport to fix, or even address, the real economic and career anxieties facing midcentury American women. Rather, Cosmo proffered an escapist alternate reality in which every woman could distract herself with a work-related dating life as glamorous as the one Gurley Brown experienced in the Hollywood of the 1940s and 1950s. For Gurley Brown, Scanlon writes, the office was "a decidedly sexy environment," not the site of daily humiliations for women relegated to serving as "office wives," making coffee and picking up laundry for frequently lewd, condescending male bosses. Knowing that Gurley Brown experienced these privations in her own career only makes her wildly optimistic view of the intersection of sex and work seem more peculiar.
A far more sophisticated take on the complications of mixing sex and work can be found in Thomas Maier's absorbing new joint biography of sex researchers William Masters and Virginia Johnson, Masters of Sex. Masters and Johnson were the first scientists to monitor the workings of the human body during actual copulation -- yes, they watched volunteer subjects, hooked up to heart-rate and blood-flow monitors, have sex on lab tables. The team revealed Freud's sex theories as the misogynist bunk they were: The clitoral orgasm isn't less "sophisticated" than the vaginal one; both types of orgasms involve the same nerve endings, and clitoral orgasms prove far stronger. As Maier writes, Masters and Johnson, in their groundbreaking works Human Sexual Response (1966) and Human Sexual Inadequacy (1970), portrayed human females as veritable "sexual Olympians," capable of hours of multi-orgasmic masturbation and sex.
The details of how Masters and Johnson conducted and funded their research are as fascinating as one would expect, given the subject matter. Masters, already a celebrated OB-GYN and fertility expert, began his mid-career transition to sex research in the 1950s, watching through peepholes as prostitutes entertained their customers. In exchange for their cooperation, he provided the women with free medical examinations and negotiated with local police to hold off on vice arrests for a week.
It was Johnson, however, originally hired by Masters as a lowly research assistant, who realized that "ordinary" women could be cajoled into having sex for the sake of science, not least because they were eager to strike a blow against male misconceptions of how the female body works. Much of Masters and Johnson's later data on the female orgasm came from watching women masturbate with the assistance of a mechanical, thrusting dildo with a camera on its tip, nicknamed "Ulysses" by the clinic's staff. Johnson, thoughtfully, would warm the phallus with a damp washcloth before experiments began. And in addition to watching married couples have sex, the duo convinced subjects to mate in the lab with complete strangers, wearing nothing but silk face masks designed and sewed by Johnson's elderly mother.

Masters, known as cold and businesslike, relied almost totally on the attractive, effervescent Johnson to interact with volunteers. When he divorced his wife in 1971 to marry his longtime business partner, the media portrayed the pairing as a real romance, proof that there could be no sex without love. The truth of the Masters-Johnson partnership, however, was far more sordid. By Johnson's own account, and that of friends and colleagues, Masters hired the divorced mother of two under the implicit understanding that she would become his sexual partner -- for the purposes of research, Masters claimed. "Sex for Virginia Johnson would become part of her job," Maier writes matter-of-factly. And indeed, Johnson told Maier herself in an interview, "No -- I was not comfortable with it, particularly. I didn't want him at all, and had no interest in him." Johnson engaged in sex with Masters, she claimed decades later, because as a single-mother, "I had a job and I wanted it."

The couple's marriage was precipitated by Johnson receiving a marriage proposal from Hank Walter, a fragrance company executive who worked with the pair on pheromone research. (Like Helen Gurley Brown, Johnson had a history of getting involved with men at work. Her second husband and the father of her two children was a band leader in whose group she sang.) Realizing this relationship would take Johnson away from their profitable sex-therapy clinic, Masters persuaded her to marry him instead, as an investment in the Masters-Johnson brand.

Throughout Masters of Sex, it is difficult to discern exactly what Masters and Johnson meant to each other. Johnson's recent statements on the matter may not be completely trustworthy; after 20 years of marriage, Masters, suffering from Parkinson's disease, left Johnson to reunite with the sweetheart of his adolescence. What's more, Johnson, by all accounts, including her own, was enthusiastically committed to Masters' research, which became her own life's work.

Though she didn't even hold a bachelor's degree, Johnson is credited with developing the innovative therapy technique, "dual therapy," that Masters and Johnson used to counsel married couples suffering from sexual dysfunction. Inspired by the work of behaviorialists such as Albert Ellis, Ivan Pavlov, and B.F. Skinner, Johnson posited that instead of engaging in years of often ineffective Freudian analysis, much sexual inadequacy could be "cured" by simple sex-education. Masters and Johnson charged up to $10,000 for a two-week course of dual therapy. They each took the sexual history of each member of the couple, comparing notes to identify sexual hang-ups and arrive at the truth of what was -- or wasn't -- going on in the marriage bed. Couples were then taught specific sexual techniques for overcoming problems such as premature ejaculation and vaginismus, a condition in which a woman's vagina tenses up, physically preventing penetration. Masters and Johnson claimed an 80 percent success rate.

Though Masters, late in life, said, "There's no question I was a male chauvinist," he went to great lengths to ensure that Johnson was credited for her contributions to their work. Perhaps he was motivated by a desire to show there was nothing professionally untoward in promoting his un-credentialed assistant to the level of full-fledged clinic co-director. Regardless, he removed the M.D. designation after his own name on the cover of the couple's second book, making the team appear even more egalitarian.

If something is missing in Maier's psychologically astute depiction of the Masters-Johnson relationship, it is a lack of depth in his portrayal of the sexual revolution in which Masters and Johnson played key roles. Maier often makes pre-Masters and Johnson America seem like a sexual backwater, ignoring the publication, years earlier, of popular books such as Sex and the Single Girl. And he gives little context with which readers can evaluate whether Masters and Johnson were correct in their supposition that about half of all postwar married couples experienced inadequate sex, especially wives. Indeed, given that recent research shows 95 percent of all Americans have had premarital sex, ever since the 1950s, one wonders if sexual ignorance was quite as widespread as people pretended it was.

Masters and Johnson's reputation was sullied by their publication, in 1979, of a book that claimed, without evidence, that homosexuality was a lifestyle choice that could be reversed through therapy. Countless Christian fundamentalists continue to cite Masters and Johnson to lend their sexual "conversion" narratives a scientific sheen. Still, the couple's positive legacy of legitimizing the study of sex -- and, most radically, reclaiming female sexuality from the Freudians -- cannot be overstated. They are assured a place in the history of sex and feminism. Alas, despite Jennifer Scanlon's protestations, Helen Gurley Brown carries not half their weight in cultural significance. Masters of Sex is this spring's true must-read book for those looking to revisit the heady, early days of the sexual revolution.
Email Post
Labels: " "Masters and Johnson" "Virginia Johnson" " Thomas Maier "Masters of Sex biography feminism love sex The American Prospect therapy