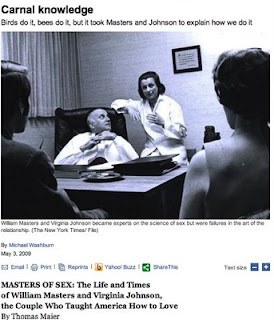 Carnal knowledge
Birds do it, bees do it, but it took Masters and Johnson to explain how we do it
By Michael Washburn | May 3, 2009
MASTERS OF SEX: The Life and Times
of William Masters and Virginia Johnson,
the Couple Who Taught America How to Love
By Thomas Maier
Basic, 411 pp., illustrated, $27.50

You know you want it - we all do, even though most have remained in the dark about what it actually is. Desire does make its demands, yet for all the staggering influence sexuality exerts on human history, we've more or less remained condemned to a misinformed sexual adolescence. As case in point: For years, original "sexologist" Elizabeth Osgood Willard's proclamation that an orgasm was more debilitating than an entire day's labor in the fields was considered scientifically valid.
Knowledge, thankfully, advances, though often in suspect ways. Over the past 100 years or so, the study of human sexuality examined the extravagantly theoretical (Richard von Krafft-Ebing's fetish for the abnormal and Freud's baroque interpretations of our polymorphous perversity) and the titillatingly sociological (Alfred Kinsey's then-prurient cataloging of sexual preference) before seriously addressing fundamental biological processes.
In this latter realm of inquiry, William Masters and Virginia Johnson are to be thanked for explaining what actually goes on when we get it on. Through their empirical research as well as their sober presentation of potentially inflammatory subject matter, Masters and Johnson, argues Thomas Maier in the over-titled "Masters of Sex: the Life and Times of William Masters and Virginia Johnson, the Couple Who Taught America How to Love," brought the "sexual revolution to suburban malls and the everyday lives of Americans." En route to the mall they managed to dispel quite a bit of sexual hokum, as well as provide shoddy scientific support to sexual reactionaries.
Masters' and Johnson's reputation rests on their first book, "Human Sexual Response," based on research conducted in secret at their clinic on the campus of St. Louis' Washington University. The book's primary intended contribution to sexology remains the four-stage human sexual response cycle: 1) excitement phase, 2) plateau phase, 3) orgasmic phase, and 4) resolution phase. To us 21st century sexual sophisticates, this cycle appears only slightly more impressive than if Masters and Johnson had spent 10 years studying how to chew gum, but in the turbulent years of the late 1960s, providing a scientific imprimatur to intimacy was transformative, if potentially scandalous.
To support their theory of sexual response, Masters and Johnson observed thousands of orgasms and their attendant physical characteristics. (Not that a teenager would want to steal his father's copy. By design, "Human Sexual Response" is not a sexy read. "Masters of Sex" adheres to this rhetorical tactic.) Their research methods - which included a prosthetic penis with an attached video camera and close observation of people, usually prostitutes or strangers who had volunteered, engaged in intercourse or masturbation - were innovative, to say the least. Methodologically speaking, there was no other way to proceed, but public knowledge of such methods would have proved scandalous. Outrage, especially with regard to their observations about female orgasm, did, in fact, break out upon publication.
Masters' and Johnson's work lent tremendous, if unintended, support to the sexual revolution. "Masters and Johnson," Maier quotes Jane Gerhard as saying, "crafted an account of female sexuality that inadvertently threw into question the pervasive understanding of heterosexuality as innate and fully satisfied through intercourse with a penis." In short, since women were able to achieve multiple orgasms while men were forced to withstand a "refractory" period, the sexual equality, if not dominance, of woman was established.
This was unintentional. Although adopted as supporters of the sexual revolution, Masters and Johnson were not crusaders for sexual progressivism, and soon their work was adopted by opponents of sexual freedom. "Homosexuality in Perspective" furnished the most obvious example of this. The book argues that "we learn our sexual preferences and orientations," and that willing homosexuals could undergo "conversion therapy" at the Masters' and Johnson clinic. "Homosexuality," writes Maier, had "ramifications that lasted for decades. . . . religious conservatives and right-wing commentators seized on Masters and Johnson's research to contend that a gay and lesbian lifestyle was a matter of personal choice and not by divine design." To this day, anti-gay factions invoke this component of their work.
The book's tripartite narrative - Masters, Johnson, and "Masters and Johnson" - attempts to weave the tale of the researchers' lives along with their research. This is a lot to ask, and the book suffers from a lack of depth when it moves beyond the research and the "Masters and Johnson" brand to deal with the individuals.
Masters was the stern scientist more interested in watching the game than socializing. His interest in sex seemingly extended only so far as it could be empirically observed and measured, though for much of his first marriage he indulged in late-night participant-observer sessions with Johnson, then his assistant.
As a single, struggling mother without a college degree in the 1950s and 1960s, Johnson's rise from assistant to co-researcher and media celebrity was impressive. "Masters of Sex" proves ambivalent with regard to her. Maier seems unsure whether Johnson was an ambitious master of her own agenda or whether she fell victim to a culture that didn't take women seriously.
One of the book's pat ironic conclusions is that the couple who knew sex inside and out were louts with love. The book catalogs their misbegotten and mismanaged romances, before discussing Masters' and Johnson's failed marriage - what had begun with professional passion of the extramarital fire had dimmed until they were merely interested in keeping the Masters and Johnson brand alive, not for passion or love. Or sex.

Michael Washburn is assistant director of the Center for the Humanities at the Graduate Center, City University of New York.

Author's Note:
I thought this review was a bit odd in saying I showed an "ambivalence" towards Virginia Johnson. Sure, just as Flaubert was "ambivalent" about Madame Bovary. It's funny to watch the reaction to this book and the various different takes by reviewers. Compare this one to a far more insightful review by Daphne Merkin in The Daily Beast (see below on this blog). Anyway, I'm glad the Globe reviewed it and hope that its parent, The New York Times, does as well. - T.M.
Email Post
Labels: " Daphne Merkin "Masters and Johnson "Masters of Sex" Boston Globe Thomas Maier