THE DAILY BEAST: "Maier’s sedulously researched and deeply absorbing biography suggests that love is far more elusive than an orgasm"

"Set against a larger cultural landscape that spans the domesticated ‘50s and liberated ‘60s on up to the present, stopping on the way to evaluate the effect of Masters and Johnson’s work on everything from feminism to perfumes, Masters of Sex is a richly informed and elegantly organized account of the two people behind the logo that stood for new sexual horizons."

They Wrote the Book on Sex
by Daphne Merkin
April 30, 2009 | 5:54am
A definitive new biography of Masters and Johnson reveals everything you always wanted to know—and more—about America’s most famous sex researchers.
There is something about the scientific study of sexual behavior—which goes by the plain-Jane name of sexology—that is hard to take seriously. Maybe it’s because few of us ever really lose our childhood sense of embarrassment—a mixture of awe and giggles—around the whole subject of naked bodies and the things they get up to. Or maybe it’s because we’d prefer to be kept in the dark about what, exactly, fuels the engine of carnal desire. Whatever the reason, the field is of fairly recent vintage. There was Freud, of course, theorizing about the inferiority of clitoral orgasms and insisting that erotic impulses began in the cradle (not to mention Havelock Ellis and Krafft-Ebing), but it wasn’t until the 1940s when Alfred Kinsey received government funding for his pioneering surveys on sexual behavior and attitudes that the idea of treating amorous response as a respectable discipline came into its own. And then along came Masters and Johnson to take the field to a whole new, hitherto undreamed-of level.
“In this scenario,” Maier notes, “women’s potential fireworks display in bed far exceeded the single little firecracker of the men beside them.”
Thomas Maier’s Masters of Sex comes with a hyperbolic and somewhat-misleading subtitle: The Life and Times of William Masters and Virginia Johnson, the Couple Who Taught America How to Love. The urge to draw in readers with attention-grabbing summations is an understandable one, but the actual story of these pioneering sex researchers, who worked together and eventually married, is both more interesting and less sensationalistic than this description would have you think. 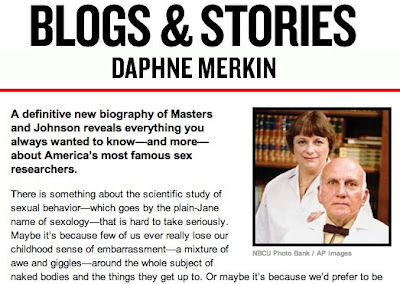 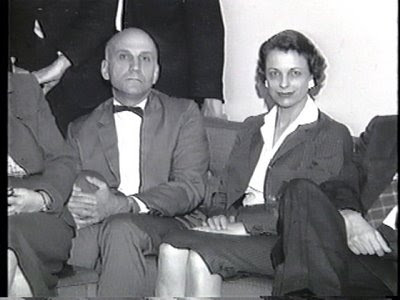 Regarding her acceptance of their sexual pact, Johnson seems conveniently blind to the complex interweaving of desire and ambition: “’No, I was not comfortable with it, particularly,’ she insisted. ‘I didn’t want him at all, and had no interest in him. I don’t know how to explain it.’” Although she resists being cast as a pre-feminist victim, she is happy to paint herself as Masters’ Girl Toy, created to satisfy his professional and personal needs. Throughout the book she refers to her former partner and ex-husband (Masters had one last surprise up his sleeve, divorcing Johnson in 1993 to marry a long-ago sweetheart for whom he had carried a torch “for 55 years”) by his last name, furthering the impression of a carefully calculated distance between them.
Johnson describes herself and Masters as “absolutely the two most secretive people on the face of the earth,” so it is fitting that one finishes this book wishing for more transparency and less occlusion. In the end, I found myself more intrigued by Masters, who seems genuinely, mesmerizingly inscrutable. Was he the man who loved women? Or was he the man who couldn’t love at all? Whatever the answer, his and Johnson’s far-seeing vision changed the sexual landscape forever, elucidating the delicate machinery of carnal pleasure and thereby bringing it out from under the covers and into the light.
Daphne Merkin was a staff writer for The New Yorker and is currently a contributing writer for The New York Times Magazine and Elle. She is the author of a novel, Enchantment, and a collection of essays, Dreaming of Hitler.
Email Post
Labels: " "Masters and Johnson" " "Thomas Maier" sex " "William Masters " Daphne Merkin "Masters of Sex "The Daily Beast "Virginia Johnson biography female chick lit love