Orange County Register: Would Masters and Johnson Be Possible Today? 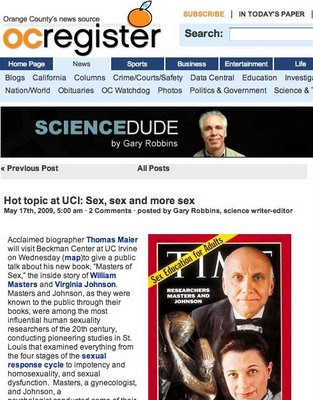 Acclaimed biographer Thomas Maier will visit Beckman Center at UC Irvine on Wednesday (map)to give a public talk about his new book, “Masters of Sex,” the inside story of William Masters and Virginia Johnson. Masters and Johnson, as they were known to the public through their books, were among the most influential human sexuality researchers of the 20th century, conducting pioneering studies in St. Louis that examined everything from the four stages of the sexual response cycle to impotency and homosexuality, and sexual dysfunction. Masters, a gynecologist, and Johnson, a psychologist,conducted some of their work in secret at Washington University, and the couple, who later married, claimed to have observed at least 10,000 live sex acts in laboratory settings.
Maier, who was widely praised for his book, “Dr. Spock: An American Life,” will give his free talk at 7 p.m. Wednesday as part of the DistinctiveVoices@Beckman series. There will be time for questions and answers, and a book signing. Maier answered a series of questions by email.

Q: I was surprised to read that lots and lots of people in the conservative Midwest in the 1950s were eager to participate in Masters and Johnson’s sex experiments at Washington University. What does this say about the American psyche of that era?
A: As conservative as Americans are about sex, the success of this project probably says more about the persuasive powers of Virginia Johnson, one of the most fascinating women of the 20th century. As partner to Dr. William Masters, a renowned ob/gyn at the school, she convinced some 700 people to volunteer to be observed having sex. Virginia was a twice-divorced mother of two who went back to college at age 32 and wound up working with Masters, first as a mere assistant. But her intuitive genius and her charisma convinced many to volunteer — including nurses and faculty wives — who would never have gotten involved in such a clinical sex study.
Their 10 year study became the biggest sex experiment of its kind in U.S. history and pioneered medicine’s dominant role today in matters of sex.
Q: Masters is quoted in your book as saying, “At a very early age, I
learned something most men never learn — that I knew nothing at all about female sexuality.” Do you think that’s true of most men today?
A: Yes, by and large. Although we live in a society drenched in sexual information and images, many men (and women) seem clueless about love and what makes the opposite sex tick. Masters and Johnson spent much of their career explaining the clinical aspects of human intimacy, but they later realized that love and matters of the heart were equally important in a meaningful relationship.
As the first and only biographer of Masters and Johnson, I was struck by how many couples today still are “dysfunctional” — unable to find happiness in their sex lives. I was also surprised how much the yearning for love played such a dramatic role in both the lives of Virginia Johnson and William Masters. At first, they were unmarried partners as a team, then they married, and ultimately divorced after 20 years. At the end of this book, they both go off looking for the lost loves of their youth.
Q: Masters and Johnson literally observed thousands of couples having sex so that they could research everything from the nature of orgasms to impotency. What do you think the public reaction would be if a school like, say, UC Irvine, publicly announced that they were opening a lab where they were going to monitor live sex acts. Has the public’s attitude about sex
evolved much since the late 50s? Was there really a revolution in the truest sense of the word?
A: I think Masters and Johnson’s large sex study couldn’t be replicated today for a number of political and cultural reasons, including ethical restrictions on the testing of human subjects. Government never provided any research funding for Masters and Johnson’s work — even though their revolutionary therapy successfully, almost miraculously, helped married couples within two weeks with a 80 percent success rate. But the biggest revolution of Masters and Johnson’s work has to do with discovering and underlining the power of female sexuality. Rather than being the weaker sex, their studies showed conclusively that women could be multi-orgasmic and possessed a greater sexual capacity than men. Their clinical proof shattered Freud’s
theories about women and sex, and replaced Freudian psychoanalysis with a
far more practical and effective sex therapy that was adopted around the world and created the modern sex therapy field.

Virginia Johnson. Image courtesy of Washington University
Q: Early in the book you talked about Virginia Johnson losing her virginity at 15 and having a fair number of partners. I came away thinking she was promiscuous for that era. Is that an accurate assessment or am I flat wrong?
A: Virginia was a bright, cheery young woman who knew how to appear as a “nice girl” but was always independent minded about her own sexuality, much like we see among young women today or characters like Carrie Bradshaw on Sex and the City. I was fascinated by Virginia because she showed the same gumption as a man in matters of sex and love, and her independent-mindedness was essential in focusing Masters and Johnson’s work that rewrote everything we know about female sexuality. But she was always very professional in the lab with staff and patients, and I think in marriage she was more faithful than her partners, including her 20-year marriage to Dr. Masters. In the final analysis, Virginia Johnson had more to do with defining the sex lives of today’s average American woman than far more famous figures like feminist Gloria Steinem.
Q: Masters and Johnson clearly knew and learned more about sex and intimacy than other Americans of their time. And yet, their marriage ended in divorce. Did that lead you to believe that sex actually becomes an increasingly less important aspect of married life over time?
A: No, for reasons that readers can learn in my book, Masters and Johnson agreed to marry each other for essentially business reasons at the height of their fame. Previously they had a long-running sexual affair while Masters was still married to his first wife and Johnson was divorced. But both later said that they had a loveless marriage after they wed in 1971 and presented themselves to the world as America’s experts on sex and love. When Masters and Johnson divorced 20 years later, they both went searching for the lost loves of their youth. Ironically, Masters and Johnson’s sex study showed that people can have active sex lives well into their 80s if they are so inclined.
Q: But didn’t the fact that they married for essentially business reasons make them something of a fraud? In many ways, they counseled people on vital aspects of marriage. But they had a loveless marriage.

Masters and Johson
A: The intensity of Masters and Johnson’s relationship — both personally and professionally — makes it impossible to question their sincerity. Most of the people they treated and helped were married couples whose sex lives together were troubled. Although they both claimed that their marriage was more a business partnership than a love affair, I think careful readers of this book will wonder if they really did love another. Indeed, the enigma of love between two people is a big part of this story!
Q: I’m going to put you on the spot, Thomas. Would you allow credible researchers like Masters and Johnson observe you having sex to help advance science’s understanding of human sexuality?
A: No, I wouldn’t personally get involved in such a study, even under the banner of “participatory journalism.” But plenty of young men and particularly women agreed to do so for Masters and Johnson, and helped millions of people, particularly married couuples with troubled sex lives, gain a much better understanding of their own sex and loves lives together.
Follow Sciencedude on Twitter at grobbins and add him as a face on Facebook.
Did you miss …
Email Post
Labels: "Masters of Sex" "Masters and Johnson" William Masters Virginia Johnson therapy love Gary Robbins Orange County Register