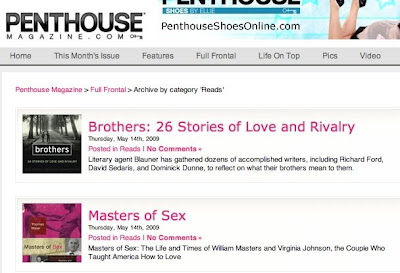 Masters of Sex: The Life and Times of William Masters and Virginia Johnson, the Couple Who Taught America How to Love
-By Thomas Maier
(Basic Books)

It’s not an exaggeration to say that Masters and Johnson, a pair of researchers who started out at Washington University in St. Louis, are responsible for much of our modern thinking about sex. Maier’s history provides an in-depth look at the twin paths of their professional research and personal relationship (they were married from 1971 to 1992), while dishing about the duo’s work as sex therapists for Hollywood stars, such as the incredibly sexy Barbara Eden of I Dream of Jeannie fame, and Senator Jacob Javits. There are plenty of fireworks here, from the pair’s controversial prescriptions of sex surrogates to the revelation that Masters developed his “squeeze method” of delaying ejaculation from observing the action in whorehouses. An excellent writer and a top-notch reporter, Maier excels at providing intriguing details without veering into titillation, and the reader comes away with a great appreciation for the pioneering forthrightness of Masters and Johnson—especially considering it’s a field of study that still makes some uneasy.
Email Post
Labels: "Masters and Johnson" therapy feminist orgasm female sex "book club" intimacy marriage chick lit Penthouse