Virginia as "Star of the Show?" Interview with St. Louis Post-Dispatch: At Left Bank Books This Thurs, May 7 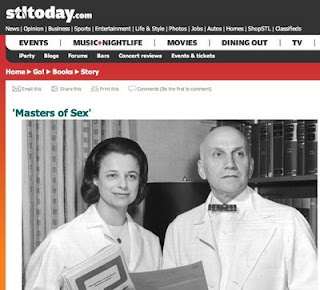 Masters and Johnson mixed business and pleasure
By Jane Henderson
POST-DISPATCH BOOK EDITOR
Sunday, May. 03 2009
Famous sex researchers Masters and Johnson married, but love probably wasn't
the reason.
The St. Louis couple's shared bedroom was a bit like their offices — a work
compact, a new biography says.
William H. Masters' proposal to Virginia E. Johnson seemed "constructed on
business commitments," Thomas Maier writes in "Masters of Sex" (Basic Books,
411 pages, $27.50).
But even as Bill and Gini, as Maier calls them, debunked sexual myths with
their scientific studies, they learned that the very thing that eluded them
often did play an important role in a happy sex life. In short, love mattered.
Maier, an investigative reporter for Newsday who talked by phone from Long
Island, will be here Thursday to discuss his book.
Masters and Johnson's research was reported far and wide for decades after they
published their first book, "Human Sexual Response," in 1966. But their
personal story has not been scrutinized by a biographer until now.
Masters, who died in 2001, wrote a memoir, but it was never published. Johnson
refused to talk to Maier, he says, until he showed her his biography "Dr.
Spock." Now living in a Central West End nursing home and using the name Mary
Masters, she opened up to him about her childhood, divorces and work in St.
Louis.
Although he may be indebted to her for this book, Maier sounds sincere when he
says that Johnson is "the star of the show. ... Her story is a classic
'Pygmalion' story."
Johnson was a twice-divorced mother of two when she came to Washington
University looking for work as a secretary. In 1957, she got a job at the old
Maternity Hospital. Later that year, Masters, a prominent ob-gyn at the
university, asked her whether helping with sex research would "bother her."
"I can't imagine why," she answered. "But why does anyone need it?"
She'd grown up on a farm in Golden City, Mo., and took sex for granted.
Thus began their collaboration. Maier portrays Johnson as a quick study who was
transformed from a secretary into a savvy assistant who unflinchingly gathered
personal histories and watched strangers copulate. As she became a full-fledged
partner in Johnson's research, she persuaded Washington University co-eds and
staffers (not prostitutes, whom Masters had used) to participate in sex
studies.
By challenging puritanical taboos, mid-century sex research by Alfred Kinsey
and Masters and Johnson made each famous — and notorious. St. Louisans didn't
embrace Johnson. Some reflected the common attitude that Johnson was a
predatory divorcee who broke up Masters' first marriage.
According to Maier, though, Masters told his office associate within a year of
their meeting that the job would require having sex with him.
Years later, when it looked like Johnson would finally marry a well-off
businessman, Masters left his wife and he and Johnson wed in 1971. She tells
Maier: "There was always the social rejection of being who we were. I thought
if I married, that would probably erase some of that."
Before they divorced in 1993, Masters and Johnson's professional work opened
the world's eyes to sexuality, particularly transforming knowledge about female
sexuality. They dispelled some Freudian theories and showed couples how to
become more comfortable with sex, offering scientific evidence of how the body
achieved orgasm.
Maier admits that a few of their conclusions and methods were shaky: Masters
apparently fabricated data in which he insisted that homosexuals could be
"converted" to heterosexuality and he continued to use controversial sexual
surrogates in therapy even after saying he'd stopped. They were roundly
criticized for warning that AIDS posed a serious threat to heterosexuals. (In
retrospect, that warning was correct, Maier says. But some fears expressed
about casual HIV transmission in their 1988 book "Crisis" have never been
supported by data.)
One thing that Maier doesn't understand is why Washington University has not
done more to promote its connection with the pair. The author says: "Bill
basically got pushed out the door at Washington University. They still don't
really recognize Masters and Johnson. ... It's extraordinary to me."
There are some who would like to see the university give an honorary degree to
Virginia Johnson, he says. "I think that's more than justified."
After the couple's divorce, each eventually went looking for childhood
sweethearts. Only Masters found his. His third marriage, at age 79, was
celebrated in People magazine.
His bride, Dody, told Maier that her husband's previous marriage "was more or
less a business deal."
Yet, she said: "They did a lot of good and contributed a lot to society. It
took a lot of courage to do that."
Email Post
Labels: "Left Bank Books" St. Louis Post-Dispatch. "Masters and Johnson" "Masters of Sex" "Virginia Johnson"