"Women, Sex, and Masters and Johnson" -- Reaction to Book and Podcast 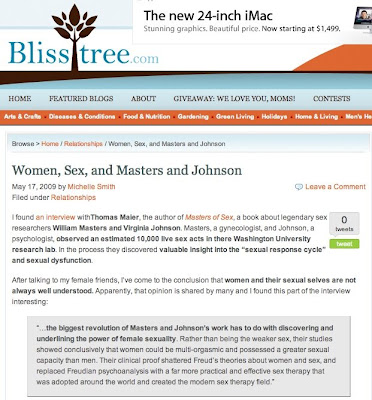 I found an interview withThomas Maier, the author of Masters of Sex, a book about legendary sex researchers William Masters and Virginia Johnson. Masters, a gynecologist, and Johnson, a psychologist, observed an estimated 10,000 live sex acts in there Washington University research lab. In the process they discovered valuable insight into the “sexual response cycle” and sexual dysfunction.
After talking to my female friends, I’ve come to the conclusion that women and their sexual selves are not always well understood. Apparently, that opinion is shared by many and I found this part of the interview interesting:
“…the biggest revolution of Masters and Johnson’s work has to do with discovering and underlining the power of female sexuality. Rather than being the weaker sex, their studies showed conclusively that women could be multi-orgasmic and possessed a greater sexual capacity than men. Their clinical proof shattered Freud’s theories about women and sex, and replaced Freudian psychoanalysis with a far more practical and effective sex therapy that was adopted around the world and created the modern sex therapy field.”
Even in my forties I’ve heard people voice opinions that made it sound as if they felt a woman with a good sexual appetite was in some way wrong or slutty. I’ve never held with that idea.
I make jokes about my past, jokes I’m not sharing here, but the point is that sex is a celebration of life, in my opinion.
Sex between two consenting adults, with nobody getting hurt, where’s the bad in that?
This sounds like a very interesting book. If I get a chance to read it, I’ll review it here.
Email Post
Labels: "Masters and Johnson" therapy feminist orgasm female sex "book club" intimacy marriage chick lit "Masters of Sex" Blisstree.com