End of Culture As We Know It - Mainstream Media Is Quoting This Blog! NY Mag Ups the Ante In Exchange of Pleasantries

There's a first time for everything -- and this is the first time this blog has made news! Well, sort of. NEW YORK MAGAZINE not only called "Newhouse" an "excellent" biography two weeks ago in its profile of Si Newhouse, but it went on this week to quote this blog in its comments page. Can The New York Times and Foreign Affairs be far behind? 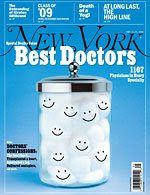 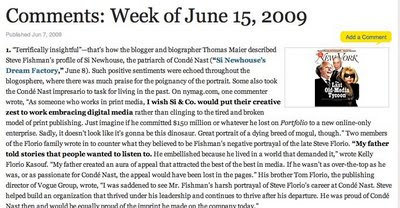 1. “Terrifically insightful”—that’s how the blogger and biographer Thomas Maier described Steve Fishman’s profile of Si Newhouse, the patriarch of Condé Nast (“Si Newhouse’s Dream Factory,” June 8). Such positive sentiments were echoed throughout the blogosphere, where there was much praise for the poignancy of the portrait. Some also took the Condé Nast impresario to task for living in the past. On nymag.com, one commenter wrote, “As someone who works in print media, I wish Si & Co. would put their creative zest to work embracing digital media rather than clinging to the tired and broken model of print publishing. Just imagine if he committed $150 million or whatever he lost on Portfolio to a new online-only enterprise. Sadly, it doesn’t look like it’s gonna be this dinosaur. Great portrait of a dying breed of mogul, though.” Two members of the Florio family wrote in to counter what they believed to be Fishman’s negative portrayal of the late Steve Florio. “My father told stories that people wanted to listen to. He embellished because he lived in a world that demanded it,” wrote Kelly Florio Kasouf. “My father created an aura of appeal that attracted the best of the best in media. If he wasn’t as over-the-top as he was, or as passionate for Condé Nast, the appeal would have been lost in the pages.” His brother Tom Florio, the publishing director of Vogue Group, wrote, “I was saddened to see Mr. Fishman’s harsh portrayal of Steve Florio’s career at Condé Nast. Steve helped build an organization that thrived under his leadership and continues to thrive after his departure. He was proud of Condé Nast then and would be equally proud of the imprint he made on the company today.”
Email Post
Labels: "Newhouse" New York Magazine Si Newhouse Steve Fishman Thomas Maier