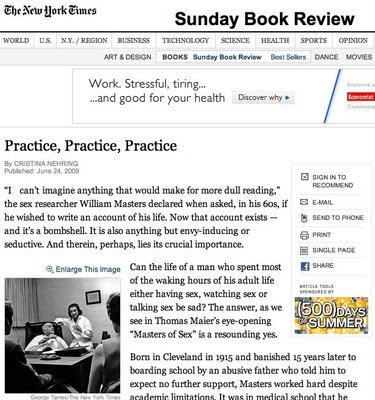 MASTERS OF SEX
The Life and Times of William Masters and Virginia Johnson, the Couple Who Taught America How to Love
By Thomas Maier

“I  can’t imagine anything that would make for more dull reading,” the sex researcher William Masters declared when asked, in his 60s, if he wished to write an account of his life. Now that account exists — and it’s a bombshell. It is also anything but envy-inducing or seductive. And therein, perhaps, lies its crucial importance.

Can the life of a man who spent most of the waking hours of his adult life either having sex, watching sex or talking sex be sad? The answer, as we see in Thomas Maier’s eye-opening “Masters of Sex” is a resounding yes.

Born in Cleveland in 1915 and banished 15 years later to boarding school by an abusive father who told him to expect no further support, Masters worked hard despite academic limitations. It was in medical school that he conceived the idea of becoming a great sex researcher. Doctors knew nothing of human sexuality except what Alfred Kinsey was recording in the 1940s and early ’50s, about a decade before Masters and Johnson got started. But the Kinsey Report was mainly hearsay — interviews with patients. William Masters didn’t want to talk; he wanted to watch, measure, film, touch.

Not only did he secure a plum position on the obstetrics-gynecology faculty at Washington University in St. Louis but in 1955 he got the blessing of that city’s police commissioner and archbishop for a groundbreaking study of female sexuality conducted in brothels. In the name of science, Maier writes, Masters crouched against peepholes and two-way mirrors observing “the amount of time in a sexual encounter, the points of entry and departure, and even the degree of bouncing around on the bed.”

The problem with this method was not just the discomfort (try wearing a lab coat and bow tie, as Masters always did, while huddling in the steamy corners of a bordello) but the fact that the sexual reactions of prostitutes were hardly representative of all women. Masters himself realized this, but didn’t change course until the day a confident young college student who dabbled in the sex industry (and delivered the startling news that women sometimes faked orgasms) told him he didn’t understand squat about female sexuality. He needed a female research partner.

Virginia Johnson was a secretary in the ob-gyn clinic, twice divorced, with two children and no degree. She was comely, sexually experienced and, more important, licentious. She cared nothing for the hullaballoo over love and romance. Sex had always been a pleasurable activity she engaged in serially with many partners, some of whom fell in love with her and most of whom she unceremoniously abandoned. “Dear heavens, was I really that insensitive?” she said when reminded of the offhand way she jilted her high school lover. She jilted her two husbands just as coolly. But then again, she once told a reporter, she had “never married anybody I really cared about,” possibly a reaction to a handsome Army captain she romanced in her youth who left her for his fiancée. “I had an active interest in sex,” she admitted, “but never particularly to the men I was involved with.”

For Masters this woman was a godsend. She freely agreed first to watch — and soon to have — sex with him. Intercourse became a part of their work contract: had she “opted out of that,” attested Masters’s aide, Dr. Robert Kolodny, she “would have been replaced.”

Masters was married at the time, and Johnson was dating a judge. But so what? Their near-nightly sex was part of their work ethic. Having stripped to the skin, Masters “instructed Gini to remain as professional as possible,” and told her that “these encounters should not venture beyond the scope of scientific inquiry,” Maier writes. And indeed, Johnson recalled, “I didn’t want him at all and had no interest in him.” This did not keep them from being “sexual athletes” for the next 13 years — until Johnson met a perfume millionaire who wanted to marry her. Masters feared the dissolution of their by then world-famous medical partnership, hastily divorced his wife and wed Johnson — and their sex life tapered off.

They would be married for 20 years, pretending to the American public that they were an ideal pair of lovebirds. Meanwhile they never used the word “love,” which Masters considered imprecise and inappropriate. Both knew what their relationship was about: the success of their product, which, by this point, was the revolutionary sexual science of the Masters and Johnson brand. They were as famous as Kleenex, Johnson boasted.

But for what? What did the more than 10,000 orgasms they observed in a laboratory reveal? Admirers, like Maier, point to the fact that they debunked Freud by revealing that there was no qualitative difference between a vaginal and clitoral orgasm, and that they made significant discoveries about vaginal lubrication and contraction during arousal.

But I would wager that for every myth they debunked, they introduced another, equally damaging. Example: If women were previously believed to be less sex-driven than men, Masters and Johnson claimed that, to the contrary, women are far more sexually superpowered, proceeding effortlessly from orgasm to orgasm. Needless to say, such an idea can cause a lot of trouble. Unless a woman is positively flying out the window like a witch on a broomstick — and staying there for hours — her partner these days is prone to turn glum and wonder if it is he who is a bad lover or she who has a (scary drumroll) “sexual dysfunction.”

Maier, the author of an earlier biography of Benjamin Spock, thinks the world of his subjects’ attainments. He passes lightly over the gaffes of their career, like their dubious research on “gay conversion.” He plays down their personal dishonesty, self-mythologizing and myriad contradictions. His pen is not probing but platitudinous: Couples “lose their innocence” when they make love, and on the night a teenage Virginia has sex for the first time, he tells us it feels “pleasant enough for her, though far from familiar.” It’s hardly surprising, therefore, that he makes little of Masters and Johnson’s own awkward and incomprehensible prose style.

Perhaps the lives of Masters and Johnson, and not their research, are the true revelation. At the end of their marital charade and their medical circus, Masters left Johnson the way he had left his first wife (and Johnson her previous husbands): in cold blood. A four-word announcement, and he was off.

Was he ever happy with her? In his unpublished memoir, Masters, who died in 2001, spends more time on his Doberman pinschers. Today, Johnson lives alone in an apartment near her erstwhile sex lab: she has destroyed the research tapes from her days with Masters, regrets the degree he blocked her from getting and the more advantageous men she never wed. Maier, who interviewed her extensively, and who has publicly enjoined Washington University to give her an honorary doctorate, sympathizes.

Masters himself went off to marry a woman he had first met as a young man and to whom he once delivered two dozen roses and a love note that were never acknowledged. When he learned, at age 79, that she never received those roses, he proposed. After their wedding, Masters looked happier than he ever had in his life and told the press that his findings about sexual vitality among the elderly held up: “But what’s romantic to me is to sit across the breakfast table and look at her — she’s a beautiful woman.” The technician of sex had turned romantic. Perhaps it’s time we follow suit.