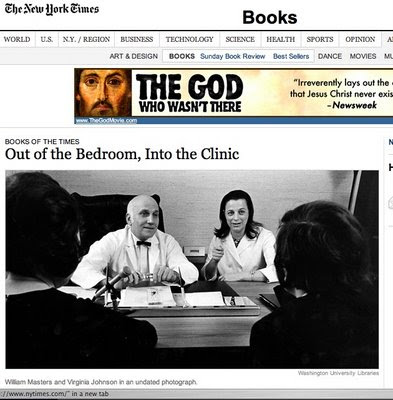 MASTERS OF SEX
The Life and Times of William Masters and Virginia Johnson, the Couple Who Taught America How to Love
By Thomas Maier
Illustrated. 411 pages. Basic Books. $27.50.

It’s hard to believe, but the word clitoris did not appear in Playboy magazine until 1968, in an interview with Masters and Johnson, the famous sex researchers.

Two years earlier, the pair had published “Human Sexual Response,” their first book, based on more than 10 years of clinical research. It was a best seller, and it rattled the culture in much the same way the first Kinsey Report had in 1948.

Alfred Kinsey compiled his information from surveys. His work was sociology. William Masters and Virginia Johnson actually watched people — a lot of people — have sex, with heart monitors and other gizmos attached to their subjects’ bodies. Here was science. Here was raw data that steamed America’s frozen peas.

“Human Sexual Response” wasn’t easy or especially titillating reading, Thomas Maier points out in his new book, “Masters of Sex: The Life and Times of William Masters and Virginia Johnson, the Couple Who Taught America How to Love.” Masters and Johnson wanted their work to be taken seriously, and wanted to stay a step ahead of the morality police, so they tended to write in almost comically dense medicalese.

Their books speak of “mounting episodes,” of “stimulative approach opportunities” and “vocalized performance concerns.” A sex flush on the stomach was a “maculopapular type of erythematous rash.” Barry White this was not.

Still, the big news in “Human Sexual Response” jumped off the page. Women, compared to men, were veritable sexual athletes, capable of multiple orgasms. More shockingly, women reported more intense orgasms when they masturbated. Who needed men? (Before long, an office sign at Gloria Steinem’s Ms. Magazine would read, “It’s 10 o’clock at night — do you know where your clitoris is?”)

Masters and Johnson became famous. Other books followed, including “Human Sexual Inadequacy” and “The Pleasure Bond.” In 1970 they appeared on the cover of Time magazine and came off as avuncular and funny. “The greatest form of sex education,” Dr. Masters told Time, “is Pop walking past Mom in the kitchen and patting her on the fanny, and Mom obviously liking it. The kids take a look at this action and think, ‘Boy, that’s for me.’ ”

They opened a clinic to treat sexual dysfunction, among the first in the country, and celebrities, among others, flocked to it. Their clients included the actress Barbara Eden, Mr. Maier writes, as well as Gov. George Wallace of Alabama, after he had been shot in an assassination attempt.

Behind Masters and Johnson’s success, however, is a long and frequently disquieting story, one that is told with patience and care by Mr. Maier in “Masters of Sex.”

Dr. Masters met Ms. Johnson in 1956. He was 41, a married professor of obstetrics and gynecology at Washington University in St. Louis and a distinguished surgeon. She was a twice-divorced 31-year-old former singer without even a college degree who had simply applied to be his assistant.

“Why me? I still don’t quite know,” Ms. Johnson said later. “I just became the princess.”

It was a professional marriage that worked. At the time, Dr. Masters was shifting from gynecology to sex research, a nearly empty field. He knew he needed a female perspective, especially after a woman told him she sometimes faked her orgasms, a claim that utterly baffled him. “You really need an interpreter,” she told him.

Ms. Johnson was not aware of Dr. Masters’s sex studies when she was hired but proved to be a perfect partner. She humanized the famously aloof Masters, was a quick learner and had a gift for putting people at ease while asking the most intimate questions.

Dr. Masters had begun his early research by studying prostitutes. But he came to realize they did not lead representative sex lives. The pair put signs up on the Washington University campus looking for volunteers to participate in their sex research and soon had more than they could handle.

Their research became the subject of rumors on the Washington University campus, and they soon left to open their own nonprofit research center. Some of the rumors were true. Bill Masters made it clear to Virginia Johnson — or Gini, as many people called her — that having sex with him was part of her job. They would study their own human sexual responses.

There are other details that, to some, were unsavory, including that the pair often paid sexual surrogates — a practice bordering on prostitution — to help men with premature ejaculation and other sexual problems.

In 1971, after being married for 29 years, Dr. Masters left his wife and married Ms. Johnson. The pair entered a relationship that seemed charmed on the outside — Shana Alexander, writing in Newsweek, called them “the Ma and Pa Kettle of sex therapists” — but was essentially loveless.

The couple’s later books were increasingly ridiculed. In “Homosexuality in Perspective” (1979), they claimed homosexuality could be cured — a claim that, with their names attached, is still trotted out by some social conservatives. In 1988 they published “Crisis: Heterosexual Behavior in the Age of AIDS,” a book that said the government was covering up the true extent of the AIDS problem. One critic called it “a classic of the terror genre.”

In 1993, Dr. Masters divorced Ms. Johnson to marry his high-school sweetheart. He died in 2001, at 85, after suffering for many years from Parkinson’s disease. Ms. Johnson tried to open a new clinic in the late 1990s, but it failed. She is now in her 80s.

“Masters of Sex” can be, at times, depressing reading. Neither Masters nor Johnson, it seems, led particularly happy or well-adjusted lives. But there’s no denying that they added greatly to the enjoyment of many other people’s time on this planet.

Mr. Maier writes well, and with good humor, about their struggles and frequent successes. They got very good at what they did. One former colleague, only slightly exaggerating, says of Dr. Masters: “Bill could look at somebody and say ‘Have an erection!’ and they would.”
Email Post
Labels: "Masters and Johnson" therapy feminist orgasm female sex "book club" intimacy marriage chick lit The New York Times Thomas Maier