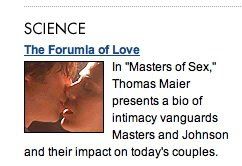 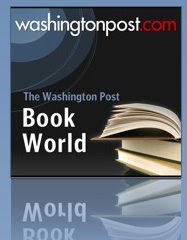 MASTERS OF SEX
The Life and Times of William Masters And Virginia Johnson, the Couple Who Taught America How to Love
By Thomas Maier
Basic. 411 pp. $27.50

How suggestively their names intertwined from the start: Masters, with its echoes of bondage and onanism, and Johnson, that venerable euphemism for penis. If they hadn't been the most famous sexologists of their day, they might have opened an S&M club in Tribeca. Gini, with her purring smile, would have greeted the customers; Bill would have stayed in the back room, testing the hoists and chains.
Which was only a couple of degrees removed from what they did in real life. Their partnership began in St. Louis in the mid-1950s, when William Masters, an ob-gyn and fertility specialist at Washington University, decided to launch a scientific inquiry into human sexuality. Unlike his predecessor, Alfred Kinsey, Masters proposed something far more immersive than questionnaires: direct observation of the body's procreative functions, with each pulse and quiver painstakingly recorded.
He began in a small way by spying on prostitutes (conscripted with the local vice squad's help and the Catholic archbishop's blessing). When one of his subjects suggested he find a female partner, Masters settled on an unlikely candidate: an unemployed, twice-divorced mother with two small kids and no degree. Initially hired as Masters's secretary, Virginia Johnson quickly proved her worth in the lab, efficiently gathering personal histories and sounding the notes of empathy that were absent from Masters's cool register.
With the help of tools like "a motor-powered Plexiglas phallus," the white-coated team observed approximately 10,000 orgasms over 11 years. The fruits of their labor were gathered in a volume called "Human Sexual Response," which managed to sell 300,000 copies in just a few months. Was it the plain brown paper wrapping? Was it the ribald prose? ("This maculopapular type of erythematous rash first appears over the epigastrium.") Or was something more tectonic going on?
Thomas Maier's intelligent and well-conceived biography reminds us that, as recently as the mid-1960s, "the word 'pregnant' could be bleeped from any television show. Sex education was kept out of the classroom." Copulation itself was "the private domain of the marital bed." Masters and Johnson, with their pharmaceutical calm and their vast edifices of data, made sex an over-the-counter commodity -- and, along the way, demolished some entrenched myths.
Intercourse during pregnancy endangers the fetus? Nope. Vaginal orgasms beat clitoral orgasms? Sorry, Dr. Freud. As for females being the delicate sex, the research showed that women could achieve five or six orgasms in as many minutes while men had to quit the field for at least an hour after every climax. Women suddenly had a green light for sex, and the news was welcome not just to hedonists -- Hugh Hefner was one of the study's biggest funders -- but to feminists, who glimpsed a new dawn of erotic self-determination. "It's 10 o'clock at night," read the sign at Ms. magazine headquarters. "Do you know where your clitoris is?" The answer, according to the St. Louis researchers, was a decided yes. Large numbers of women had already confessed that they enjoyed their best sex alone.
Kinsey died at the height of his notoriety, but Masters and Johnson were able to parlay their fame into a second career of sexual healing. For a then-whopping fee of $3,000 (actually, it's still whopping), movie stars, senators and the just plain dysfunctional could spruce up their sex lives with the help of male-female therapy teams, achieving results in a couple of weeks that might have required many years of traditional psychoanalysis. By the time Masters and Johnson came out with a second volume in 1970, their names were as wedded in the public mind as Romeo and Juliet.
Before long, they were wedded in the eyes of the law, too. Their union, so appealing on the surface, had one slight problem: They didn't love each other. Much of the problem lay with Masters, who admitted to being "sort of a bastard" and a stranger to the ways of the heart. He carried on an extramarital affair with Johnson for many years before divorcing his wife and, in the twilight of his life, abruptly ditched Johnson for an old sweetheart.
He was also the driving force behind the team's controversial embrace of conversion therapy for gays. In "Homosexuality in Perspective" (1979), he and Johnson claimed they could straighten out gay men or women in a matter of weeks, with a "failure rate" of only one-third. Buttressed with phony case studies, the book's findings were quickly denounced by the medical establishment and seized upon just as quickly by the religious right as evidence that gay lifestyles were a choice, not an orientation.
So Masters and Johnson bear some of the blame for the "ex-gay" ministries that currently litter our cultural landscape, but who is to blame for the dissolution of the Masters-and-Johnson brand? Their names are now largely unknown, I'd wager, to anyone under the age of 40, in part because the mainstreaming of sex they advocated and embodied has taken hold with such a vengeance. We are not, to put it mildly, as shockable as we were. Cosmopolitan magazine weighs in each month with primers on the female orgasm; sex columnists like Dan Savage and Susie Bright embrace every kink and fetish of the human comedy; grown men fill the airwaves with choruses of "Viva Viagra!" The culture that Masters and Johnson helped to create has swallowed them whole.
Louis Bayard is a novelist and reviewer whose most recent book is "The Black Tower."
Email Post
Labels: " "Thomas Maier " therapy "Masters and Johnson" "Masters of Sex biography history sex love "book club" intimacy marriage chick lit Book World podcast Washington Post