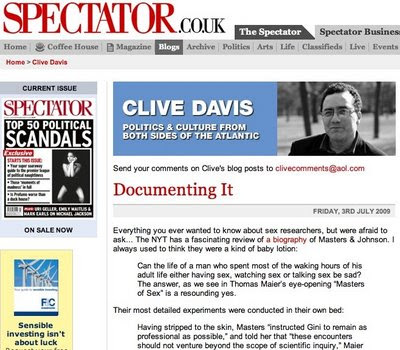 Documenting It
FRIDAY, 3RD JULY 2009
Everything you ever wanted to know about sex researchers, but were afraid to ask... The NYT has a fascinating review of a biography of Masters & Johnson. I always used to think they were a kind of baby lotion:
Can the life of a man who spent most of the waking hours of his adult life either having sex, watching sex or talking sex be sad? The answer, as we see in Thomas Maier’s eye-opening “Masters of Sex” is a resounding yes.
Their most detailed experiments were conducted in their own bed:
Having stripped to the skin, Masters “instructed Gini to remain as professional as possible,” and told her that “these encounters should not venture beyond the scope of scientific inquiry,” Maier writes... They would be married for 20 years, pretending to the American public that they were an ideal pair of lovebirds. Meanwhile they never used the word “love,” which Masters considered imprecise and inappropriate. Both knew what their relationship was about: the success of their product... They were as famous as Kleenex, Johnson boasted.
Email Post
Labels: "Masters of Sex" Clive Davis New York Times sex love therapy "Virginia Johnson" ""Masters and Johnson" therapy feminist orgasm female sex "book club" intimacy marriage chick lit UK Spectator