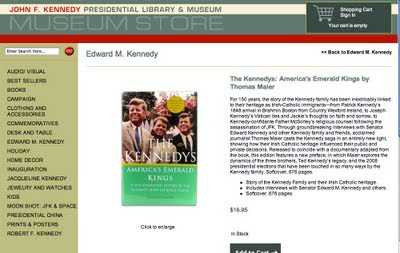 Sen. Ted Kennedy's passing at age 77 brings the end of an era in America politics, the remarkable legacy of the Kennedys and their sense of public service and their embodiment of many American ideals. My history of the Kennedys -- "The Kennedys: America's Emerald Kings" (Basic Books) -- was updated in 2008 for the Warner Bros documentary based on the book and is available at Amazon and at the bookstore of the John F. Kennedy Presidential Library. Sen. Kennedy was very gracious to me personally, granting an interview for my book, allowing private family photos to be used, and in his comments about my investigative work at Newsday.
Email Post
Labels: Kennedys Sen. Edward Kennedy Ted Kennedy Teddy Kennedy Thomas Maier Video