Paperback Version of "Masters of Sex", the Biography of Masters and Johnson, Arrives Aug. 3 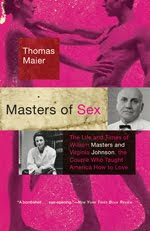 Description from Basic Books Catalogue:
Before Sex and the City and Viagra, America relied on William Masters and Virginia Johnson to teach us everything we needed to know about what goes on in the bedroom. Over the course of more than forty years, Masters and Johnson convinced hundreds of men and women to copulate in the name of science—over 10,000 sexual acts in all. They quickly became the nation’s experts on love and intimacy. Revealing and beautifully told, Masters of Sex sheds light on the eternal mysteries of intimacy and the American psyche.

From Preface
“What is this thing called love?"
—Cole Porter.
Sex, in all its glorious expressions, has been an integral part of the American experience in my four biographies—respectively, about Si Newhouse, Benjamin Spock, the Kennedys, and now Masters and Johnson. As Dr. Spock, the best-selling expert who raised America’s baby-boom generation, once told me with disarming honesty, “Everything is about sex!” Indeed, at its most powerful and transcendent, sex is about the progression of the species, the origin of self-identity, and the most intimate form of expression between adults.
The story of William Masters and Virginia Johnson, as perhaps none other, deals directly with the eternal mysteries of sex and love. Their public life provides an unparalleled window into America’s “sexual revolution” and its historic cultural changes still with us today, while their private relationship mirrors many of the most basic desires, tensions, and contradictions between men and women. I first interviewed Dr. Masters when he retired in December 1994, already showing symptoms of Parkinson’s disease, that which would lead to his death in 2001. After several false starts, I gained the complete cooperation of Virginia Johnson in 2005, conducting many hours of interviews, including a lengthy visit to her St. Louis home. Despite worldwide fame, “we were absolutely the two most secretive people on the face of the eEarth,” Johnson confided. “There’s simply no one who knew us well. People have a lot of speculation, but they don’t know.”
For years, the work of Masters and Johnson remained shrouded in strict confidentiality as a result of their own desire to avoid public scrutiny. Only now–—with the willingness of many to be interviewed and access to their letters, internal documents, and Masters’s own unpublished memoir—can we fully consider their remarkable life and times. For all of the clinical knowledge they gained from America’s biggest sex experiment–—involving hundreds of women and men and more than 10,000 ten thousand orgasms—their story is very much about the elusiveness and indefinable aspects of human intimacy. As many today still ask themselves, “What is this thing called love?”
—T.M.
Long Island, New York,
Email Post
Labels: "Masters and Johnson" beach reading summer Kindle sex feminist orgasm female sex "book club" intimacy marriage chick lit "Masters of Sex" The New York Times