Newhouse: The Last Tycoon (But the First paperback!) 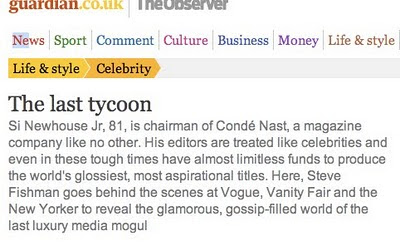 In The Guardian, Steve Fishman's profile of Si Newhouse is reprinted from New York magazine and mentions my book, "Newhouse: All the Power, Glitter, and Glory of America's Richest Media Empire and Secretive Man Behind It". And it's still available in paperback with an update!

" Sam was a newspaper man - Si didn't see much of him until he was old enough to visit the Staten Island Advance, Sam's first paper. By Sam's death in 1979, at the age of 84, he'd amassed a newspaper empire that stretched from Newark, New Jersey, up to Portland, Oregon - larger, by some measures, than that of William Randolph Hearst's. Both of Sam's sons were college dropouts who worked in the business from the age of 21. Sam tapped Donald, his younger son, to run the newspapers. Si was installed at Condé Nast - he finally became chairman in 1975. "Those who knew him well seem to think he trusted the judgment of his younger son, Donald, more than Si," writes Thomas Maier in his excellent biography, Newhouse.
It was clear what Newhouse's father thought of magazines; they were baubles, suitable for socially ambitious middle-aged ladies. Si, though, would ultimately prove his father wrong about the value of the magazines and about his talents. 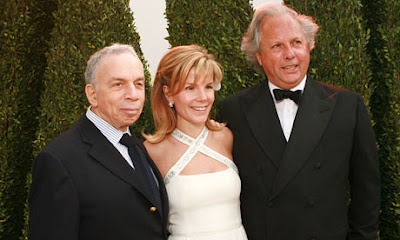