Recalling Masters and Johnson 40 years ago; Their Bio "Masters of Sex" Now in Paperback and Kindle 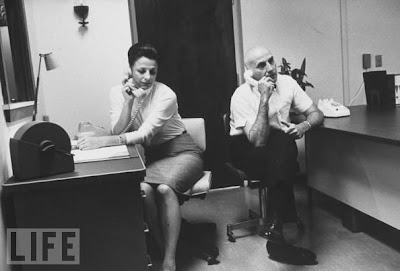 The new paperback for "Masters of Sex" is out this month along with the Kindle edition that can also be read on iPad and all e-readers. The only thing obscene about this book is its low price. (Otherwise, very high literary standards. Oprah and her magazine loved it, and so did the NY Times.)
Forty years ago, Masters and Johnson published their second book in 1970 that revolutionized sex therapy for married couples in America and turned them into the most talked-about couple in the land. The Atlantic Magazine ran this profile of them and here's a little snippet about Virginia Johnson.

Gini Johnson, wearing a black and white patterned overblouse and white uniform pants, is now on her way to the Foundation in an open convertible. She is an attractive forty-five-year-old who could, if she dedicated time to herself instead of her work, be ravishing. In the publicity pictures shot for their second book, Gini was made up by George Masters (no relative) and benefited greatly by eyeliner, eye-shadow, false eyelashes that wisp up quickly at the end, and lipstick applied by brush; but she usually wears her hair swept back from her face into a ponytail or covered by a fall that is a shade off from her own auburn. She smiles more readily than Masters, but keeps her lower jaw set, which prevents her from making full-fledged cheek-wrinkling grins.
Since the beginning of this year, when word began to circulate that Masters and Johnson were ready to publish their second book, they have made themselves available, within reason, to the print media, particularly the women's magazines, which they consider a vital conduit for their information.