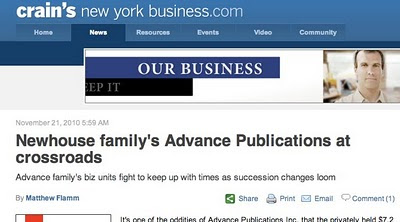 Cash cows that don't produce as much cash. Monopoly news that no longer have a monopoly on the news. What's a billion-dollar media empire to do?

In Crain's New York Business, media writer Matthew Flamm asks the tough questions about the future of the Newhouse media empire and even manages to mention the "Newhouse" biography, winner of the Frank Luther Prize Award as best media book of 1995.

The paperback is still on sale. It's nice to see it's still relevant in the Newhouse media coverage today.

As Flamm's article says: "... the Advance tradition of doing things its own way—carried on by the patriarch's sons, S.I. “Si” Newhouse Jr., chairman, and Donald Newhouse, president—may be coming to an end. An unprecedented shift in the media landscape has brought Advance to a crossroads, forcing overdue changes at its newspaper and magazine divisions and raising doubts about their future. And with the company's two leaders in their 80s, it can't be too long before the Newhouse family must deal with the complicated issue of succession.
“For the first time in the life of this family-run organization, there are no easy answers, and nothing's a sure bet,” says Thomas Maier, author of the biography Newhouse.
Makes you wanna go out and buy the paperback, right? 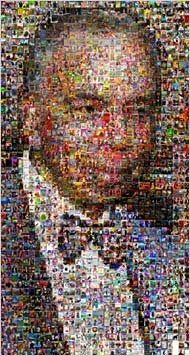