End of an Era for Kennedys in Washington 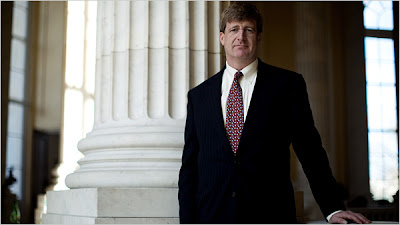 With Patrick Kennedy's departure from the House next month, the Kennedy history in Congress comes to an end, at least for now. Here's what the NY Times said about it.

When his eighth term ends early next month, it will be the first time since 1947 — when John F. Kennedy became a congressman from Massachusetts — that no member of his family will hold a federal office.
With Mr. Kennedy’s father, Senator Edward M. Kennedy, dead for more than a year now and no one else in the family voicing plans to run for office, Capitol Hill will be left with ghosts and memories. The only politician left among them is Bobby Shriver, whose mayoral term in Santa Monica, Calif., just ended but who still sits on the City Council there.
“This is a family that once had the presidency and two Senate seats, and they’re now down to the mayor of Santa Monica,” said Darrell M. West, a Brookings Institution scholar. “It’s a pretty dramatic fall, and it’s symbolic of the decline of liberalism.”
In an interview here last week, Mr. Kennedy seemed caught between two urges: to disappear into a quiet life, and to keep trying, as a private citizen, to fill what he called the enormous shoes — “too big to ever imagine,” he said — of his father and uncles.
“My family legacy was never just about government service,” said Mr. Kennedy, who talked for more than two hours in an empty room at the Cannon House Office Building, where John F. Kennedy also worked as a House member from 1947 to 1953. “It was about giving back, and the branding of President Kennedy’s call for Americans to give back to their country.”