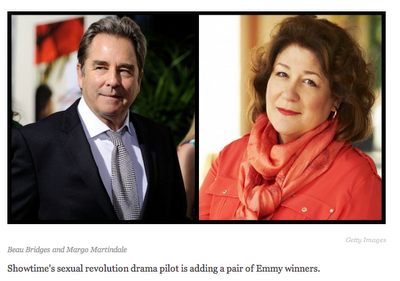 Emmy Award winners Beau Bridges and Margo Martindale will join Frost/Nixon's Michael Sheen in Showtime's drama pilot "Masters of Sex," according to The Hollywood Reporter.
As previously reported, Sheen will star as 1960s human sexuality pioneer William Masters in the project that is written by Michelle Ashford and directed by John Madden.
The Showtime drama, which is adapted from Thomas Maier's book "Masters of Sex: The Life And Times Of William Masters And Virginia Johnson, The Couple Who Taught America How To Love," will chronicle the lives and romance of Masters (Sheen) and Johnson, who will be played by Lizzy Caplan ("Mean Girls," "127 Hours").
Bridges will play Masters' boss, Barton Scully, and Martindale will guest star as Masters' secretary, Miss Horchow.
Sheen and his manager Tammy Rosen will serve as producers on the show that is scheduled to begin production in March in New York.
Bridges, who currently stars as J.B. Biggley in the Broadway revival of How to Succeed in Business Without Really Trying, has also been seen on Broadway in Who's Who in Hell and Where's Daddy? He won Emmy Awards for HBO’s “The Second Civil War,” “The Positively True Adventures of the Alleged Texas Cheerleader-Murdering Mom” and “Without Warning: The James Brady Story.”
Martindale was nominated for a Tony Award for her performance in Cat on a Hot Tin Roof. She won an Emmy Award for her work on "Justified" and has also been seen in "The Hours" and "Million Dollar Baby," among others. The performer will also co-star in the upcoming ABC pilot "Counter Culture."
Email Post
Labels: "Masters and Johnson" Thomas Maier "Masters of Sex" Beau Bridges Margo Martindale showtime