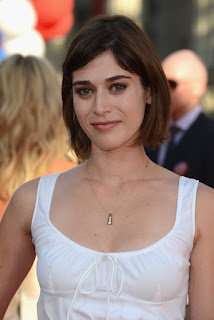 Here's what Lizzy Caplan had to say to WNBC in New York about her new Showtime series "Masters of Sex" based on the book of the same name.

Tell me about your TV show.

It's called 'Masters of Sex'. It's on Showtime. I don't know the air date. We shot the pilot but we haven't begun shooting the series yet. It's about Masters and Johnson, the famed sex researchers in the 1950s. I play Virginia Johnson and Michael Sheen plays William Masters. It's based on this book, this biography of the two of them, and it is one of the most fascinating stories I've ever read. It is so outlandish, what these two people did, and yet it all really happened. And so I'm very excited to make a show where if anybody's like, 'No, that's unbelievable.' It's like, 'Well, read the book.' Because these people did it. And they did it in real life in Missouri in the '50s.
How did you get your hooks into her? What helped you crack the code as to who she was?
Well, I read the book, and there were little things peppered throughout the book that were pretty strange coincidences. Just little tiny things that wouldn't be mind-blowing but that I started to feel sort of connected to her. And there was something so brave to me about this woman who was so comfortable with her sexuality at a time where women weren't. They had no ownership over their own sexuality. And she was this twice-divorced woman with two kids and a nightclub singer and she sort of hustles her way into this hospital and becomes this doctor's assistant all by virtue of her own moxie and personality.
And she becomes half of what is the most important sex researcher team that I think has ever been. Showing up on set with Michael Sheen, who's an actor who I respect so much – I refer to him as a real actor because he's like played Hamlet and is one of those trained actors. And it felt like the dynamic was already in place because I felt like this scrappy little comedy actress coming in and playing with this big gun. And that was how it was for the two of these people, so before we even started rolling it was like, 'Okay, whoever's casting this show is smart because they're setting up this like power situation like from the get-go.' And Michael and I have since become good buddies and we're gonna have a blast shooting the show. And I'm like ridiculously excited.
Crazy sex fact that you learned as a part of that gig?
The craziest sex fact that I learned as a part of that gig was that before Masters and Johnson kind of blew the lid off this, everybody considered the male orgasm to be the only important orgasm, the only one that mattered. And it's all Freudian s***, like the virginal orgasm was the only one that counted and a clitoral orgasm was bullshit. And like people really lived their lives like that. That's crazy. I'm gonna have to say the word 'clitoral' so many times in the next year.