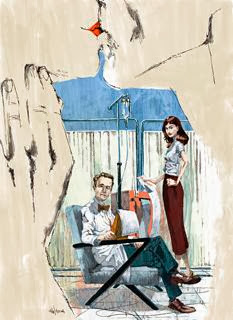 So even Eustace Tilley likes a little... Masters of Sex! Here's a little of what The New Yorker is saying about "Masters" and its impact.


“Masters of Sex,” a new hour-long drama on Showtime, is a fizzy, ebullient quasi-historical romp about the team of scientific pioneers who transformed American attitudes toward sex. But let’s not bury the lead: it’s also a serious turn-on.
For many viewers, this will be reason enough to watch, and there’s no shame in that game; this is adult cable television’s bread and butter, after all. Luckily, the show has an appeal beyond solid date-night viewing. “Masters of Sex” is based on Thomas Maier’s lively 2009 book of the same title, which tells the story of the rise of William Masters, a renegade who aimed to study sex in the lab, using human subjects. In nineteen-fifties St. Louis, where Masters was a prominent ob-gyn, this was an idea outrageous enough that he had to keep the project secret. Then, almost by chance, Masters found his soul mate. Virginia Johnson was a low-level secretary with no college degree, but she had social skills that the doctor lacked, in addition to a spitfire sexual iconoclasm. The two became intellectual partners and, later, lovers—though few knew about that part until many years afterward. Their best-selling 1966 study blasted through medical prudery and Freudian hornswoggle, explaining the physiology of orgasms, spreading the good word about healthy sexuality, and turning them into national celebrities.
This sounds like a romantic, upbeat story, and at times “Masters of Sex” does have a caper-plot element, as Johnson (Lizzy Caplan) flirts with doctors and nurses in the hospital, convincing them to “do it” for science. The sex scenes are graphic and often very funny, with classic Showtime panache, and they star people you definitely want to see having sex (or, in many cases, masturbating with sensors pasted to their skin, as the doctors murmur things like “Turgidity of nipples”). In its stylish pilot, “Masters of Sex” initially comes off a bit like “Mad Men with Benefits”: fetishistic fun with a historical pedigree. But over the first six episodes, the show deepens by degrees, becoming more poignant, and more surprising, too. It begins to acknowledge some of the unsettling implications of the doctor’s work, and lets characters who start as entertaining cartoons gain complexity, taking the plot in new directions.