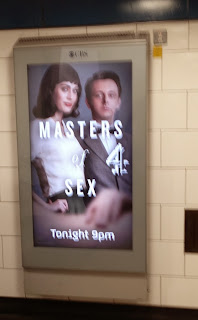 Merry Ole England and the rest of the UK are now so much more merrier with the premiere tonight of "Masters of Sex" on Channel 4. Our London correspondent, Andrew Maier, emailed
this poster from the subway .. er, tube, touting the new show. Below is one of my favorite pieces from England, written by Mr. Charles Laurence, who interviewed me here in NY.

Masters of Sex: Did the researchers find joy in the science?

Sex researchers Dr William Masters and Virginia Johnson told us about the goings on under the covers, but they left one questioned unanswered...